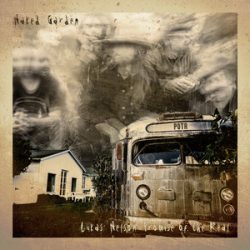 Last June’s ‘Turn Off The News (Build A Garden)’ was Lukas Nelson & Promise of the Real’s eighth and most successful album – it was also their best to date. ‘Naked Garden’ is an album of out-takes and alternative versions from the sessions, at The Band‘s old Shangri La studio and Village Studios in LA, for ‘Turn Off The News (Build A Garden)’ and is just as good, if not in some ways, better than its predecessor. For those who don’t know it, guitarist and singer-songwriter Lukas Nelson is Willie’s son and he started touring with his dad in the early ’00s. He has said his main musical influences are Jimi Hendrix and Neil Young and his instrumental skills were clear from the start. Bob Dylan offered to take a teenage Lukas on the road as his guitarist only to have his mother forbid it. He ended up at college in LA in 2007 and over a year formed Promise of the Real to play a mix of country and rock’n’roll.

The group landed a record deal but really made their name as a touring outfit becoming so proficient that they were asked to become Neil Young’s backing band. Neil Young’s ability to mix authentic country and rock’n’roll styles is a very obvious influence on Lukas Nelson & POTR. With Neil Young they dipped their toe in the film industry appearing in Neil and Daryl Hannah’s ‘Paradox’. They broke through to the mainstream media when Lukas was asked to write songs with Lady Gaga for Bradley Cooper’s 2018 remake of ‘A Star Is Born’ with POTR playing the part of Bradley Cooper’s backing band in the film.

Where ‘Turn Off The News (Build A Garden)’ was a well-produced tightly played album ‘Naked Garden’ is rougher and more relaxed, showing probably the true personality of the band. Also, in these troubled times, it will bring some much-needed income to what is still primarily a touring band. It also allows for a more nuanced view around the previous album’s anti-media stance given the current importance of media in keeping everyone informed around the current Covid-19 crisis.

The album opens with ‘Entirely Different Stars’ that starts with some sonic effects before the acoustic guitar of Lukas kicks in on the jaunty rhythm of bassist Corey McCormick, drummer Anthony LoGerto and percussionist Tao Melgar on a song about escaping from the world’s current challenges. ‘Civilised Hell’ from ‘Turn Off The News’ appears in two alternative versions here with the electric version being the best with the lyrics being particularly biting.

POTL are so integrated they are able to seamlessly change moods within a song which they do effectively on ‘Movie In My Mind’ and ‘Focus On The Music’. ‘My Own Wave’ starts with Lukas telling the band to play as if they were live and it is far from clear why this tune was left off the previous album. The band next take a slower pace for ‘Fade To Black’. The album is sequenced so that the alternative takes are towards the end of the album. This does not spoil the flow and even though the album runs for more than 60 minutes it never feels less than a whole.

Anyone who enjoyed ‘Turn Off The News (Build A Garden)’ needs to hear this album as it completes the picture and for anyone who has yet to try the music of Lukas Nelson & Promise of the Real couldn’t do better than to start with ‘Naked Garden’. Lukas Nelson may have movie-star looks and is seen increasingly as a darling of the media but he is a real musician who seamlessly blends various genres and is backed by a truly integrated band of fellow musical travellers.