The late ‘60s were a strange and interesting time so it shouldn’t be seen as too surprising that a Jewish Philadelphia born jazz fan, who had actually managed to shake John Coltrane’s hand, formed a Western Swing band in Paw Paw, West Virginia, after attending a Commander Cody and His Lost Planet Airmen gig. The jazz fan was Ray Benson and the band was Asleep At The Wheel and the year was 1969.

The group soon got a gig supporting Alice Cooper and Hot Tuna and within a year had moved to East Oakland, California, at the suggestion of Commander Cody and His Lost Planet Airmen. They shared the local audience with Commander Cody, and to an extent Doug Sahm. After being mentioned in a Rolling Stone interview by Van Morrison they secured a record deal with United Artists. At the suggestion of Willie Nelson they moved to Austin, Texas, in 1974 where they became stalwarts of the Austin music scene and it is still their base today. Since their early days they have released over 30 albums, won 9 Grammy Awards and while Ray Benson has been a constant as singer, songwriter, guitarist and producer there have been over 80 other musicians passing through the band’s ranks.

By 1969, Western Swing was a fading musical memory in the minds of its fans from the ‘20s, ‘30s and ‘40s and what very few people appreciated was its fundament influence on rockabilly, rock’n’roll and the Bakersfield sound of Buck Owens and Merle Haggard. Western Swing developed in the ‘20s in

Oklahoma and Texas when local groups added the current jazz music to the traditional music of those states in a effort to keep the locals dancing. It proved to be a southern phenomenon spreading to California and other southern states. It hit its peak of popularity just before and during WWII. Its popularity waned with the decline in the popularity of other jazz dance music and the rise of R&B and rock’n’roll. As a genre, it proved particularly innovative in its instrumentation,  popularising the amplified steel guitar which was subsequently adopted by other country musicians. Key artists include Bob Wills And His Texas Playboys and Spade Cooley. Merle Travis has said “Western Swing is nothing more than a group of talented country boys, unschooled in music, but playing the music they feel, beating a solid two-four rhythm to the harmonies that buzz around their brains. When it escapes in all its musical glory, my friend, you have Western Swing.”.

The ‘70s Western Swing revival got a boost when Merle Haggard released his ‘A Tribute to the Best Damn Fiddle Player in the World (or, My Salute to Bob Wills)’ in 1970 and Commander Cody And His Lost Planet Airmen and Asleep At The Wheel picked  up the hippie youth audience. Asleep At The Wheel have kept the Western Swing flag flying for 50 years. In doing this they have included other root genres such as boogie woogie, blues, R&B and Texas honky-tonk in their music and they have also adapted the work of  more current songwriters such as Guy Clark and John Hiatt. If they hadn’t kept Western Swing alive in the ‘70s and ‘80s it is questionable whether Lyle Lovett and Shelby Lynne would have made the records they did in the ‘90s.

Their 1973 debut album ‘Comin’ Right At Ya’ set out their musical manifesto that has served them throughout their long career including as it does covers of Bob Wills, ‘Take Me Back To Tulsa’, and Moon Mullician, ‘Cherokee Boogie’, with their own songs. At this point, they still show a debt to Commander Cody and while they would make better records it is an impressive and lively debut even if it was not a commercial success. It was at this point in their career that their move to Austin proved very fortuitous as it coincided with the breakthrough success of Willie Nelson with ‘Red 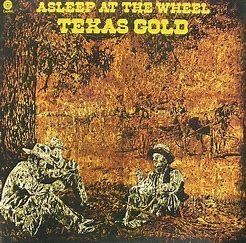 Headed Stranger’ and the media attention the whole Austin music scene received. Asleep At The Wheel became a success with country music listeners placing their cover of Louis Jordon’s ‘Choo Choo Oh’Boogie’ on the country single chart. As an aside, Britain’s own Chilli Willi And The Red Hot Peppers included their version on their second album ‘Bongos Over Balham’. ‘Texas Gold’ from 1975 was Asleep At The Wheel’s breakthrough album reaching the Country Top Ten and included a Top Ten single in ‘The Letter That Johnny Walker Read’. The band continued to have success through the ‘70s getting their first Grammy Award in 1978 for their instrumental cover of Count Basie’s ‘One O’Clock Jump’.

They hit a bumpy patch in the early ‘80s when founding members Lucky Oceans and Chris O’Connell left and the band were forced to undertake soundtrack and commercials work to help manage their large debt. They 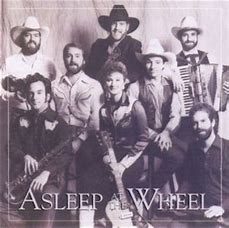 went back into the studio in 1985 and recorded one of their best albums and second self titled album but it was not a commercial success. Ray Benson had been working as a producer and managed to get the restructured band, with the returning Chris O’Connell, a new contract with Epic that started a successful chart run that finally establish them as a major act. Also, the changes confirmed Ray Benson’s pivotal role in the group that continued to change personnel over the years which allowed their sound to be refreshed while still staying true to the original vision. This rebirth has continued to the present day with 2018’s ‘New Routes’ featuring a new band and covers of Guy Clark and Paulo Nutini among others.

Ray Benson has continued to enjoy a parallel career as songwriter, session musician  and producer over the years working with everyone from Bob Dylan, Dan Hicks, Shooter Jennings, Raul Malo, The Texas Tornados and many more. He has also been a mainstay of the Austin music scene owning the Bismeaux Studios and associated record label, he has sat on the board of the Austin City Limits TV show and is co-founder of Rhythm And Blues Foundation. If that wasn’t enough he has also found time to release 3 solo albums.

The Canon: Asleep At The Wheel have not released a bad album in their long career however some of them have been outstanding. ‘Texas Gold’ (1975) is their first classic release and while it includes two Bob Wills covers it also shows the band delivering a truly integrated sound for the first time. ‘Asleep At The Wheel’ (1985) again includes covers of Western Swing classics but also includes John Hiatt’s ‘This Is The Way We Make A Broken Heart’. Western Swing is essentially dance music and the all cover ‘Western Standard Time’ (1988) is a great roots rock album including tracks originally recorded by Bob Wills, Commander Cody And His Lost Planet Airmen, Ernest Tubb, Glenn Miller and more. They have released three tribute albums to Bob Wills ‘A Tribute To The Music Of Bob Wills & The Texas Play Boys’ (1993), ‘Ride With Bob’ (1999) and ‘Still The King: Celebrating The Music Of Bob Wills And His Texas Playboys’ (2015) and all of these albums include a multitude of country and roots music guests. ‘Remember The Alamo’ (2003) is Ray Benson’s attempt to place The Alamo in the context of American culture and includes a range of tunes including movie soundtracks, traditional tunes and a self-penned ode to Ossie Osbourne’s act of self-relief on its hallowed walls. Finally, ‘Willie And The Wheel’ (2009) features Willie Nelson backed by Asleep At The Wheel running through the Western Swing songbook with production input from Jerry Wexler. While there is nothing new here it is a great fun record that is a real celebration of the genre. Asleep At The Wheel have had numerous record labels over the years and there are many compilation albums that are enjoyable in their own right, however there has never been a definitive compilation of their whole career.

Key Tracks: The following tracks give a good flavour of what Asleep At The Wheel are all about but their output is so consistent that this list could have included many other equally worthy alternative tracks.

2 thoughts on “AmericanA to Z: Asleep At The Wheel”