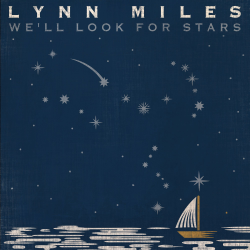 ‘We’ll Look For Stars’ is the 15th album from Canadian singer-songwriter Lynn Miles, who featured last month in our ‘Forgotten Artists’ feature. Perhaps overlooked rather than forgotten, as our writer suggested, this album demonstrates again what a great songwriter Miles is, deserving of much wider attention. Lovers of beautifully crafted songs written from the heart will immediately warm to the latest release from an artist who has been recording and touring since the early 1990s. A talented multi-instrumentalist, playing guitar, piano, flute, violin and mandolin, Miles won a Juno award (Canadian Grammy) in 2003 for Roots Traditional Album of the year, and went on to be nominated in the same category in 2006 and 2011. She is also the recipient of six Canadian Folk music awards including three for songwriter of the year, and as half of the duo THE LYNNeS with Lynne Hanson for songwriters of the year and ensemble of the year at the 2018 Canadian Folk Music Awards.

Miles is an exceptional lyricist, the eleven self-penned songs on the album exploring a wide range of themes around the human condition, always expressed with empathy for her subject, and a poet’s touch. In the opening title track ‘We’ll Look For Stars‘ she sings “We will wax and wane just like the moon /in the end the end will come too soon/ the stories we keep in our souls/are wild and brave and sad and gold/our songs will rise and fall and change their tunes.” While in ‘A Heart Can Only Take So Much’ a classic dilemma is laid bare: “I can’t believe I stayed so long/does that mean I’m weak or does that mean I’m strong/I can’t believe I stayed so long till dawn/ does that make you right does that make me wrong”.

In ‘Old Soul’ her lyrics paint a vivid picture that draws the listener in, as she tells: “From the day she was born she lived like she knew she’d be dying/she always knew there’d be days in a life when there’d be some crying/ she knows how to spot trouble and heartache a mile away/ she doesn’t ignore it, she goes and explores it/ to see what it has to say”, while in the Dylanesque ‘She Drinks‘ we learn the reason why, explaining: “She said I bet everything on a beautiful horse/He went and lost the race of course/there was nobody with me at the finish line/so I closed my eyes and I learned to kill time”.

Miles’ vocals are strong throughout, sometimes soft but with steel always in reserve, and arrangements always meet the mantra ‘serve the song’, no more and no less than each needs, ranging from those featuring a lone piano or acoustic guitar accompanying her voice with gentle percussion, to a fuller band sound augmented with accordion, slide guitar or strings. Striking an unsettling note, ‘The World is Spinning’ features a memorable modal arpeggio motif on keys, summoning up the dizziness of a fairground ride, while the up-tempo ‘Main Street’ is an opportunity for Miles to showcase a rockier style.

An excellent album, with lyrics that will keep the listener returning.