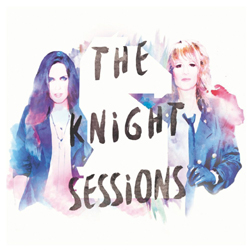 Canadians Brenley MacEarchen and Lisa MacIssaac have been charming audiences and listeners for nigh on two decades now with their rootsy songs and glorious combined voices. Over the years their sound has ranged from folk to indie rock to radio friendly pop harmonies but on The Knight Sessions they try to get back to basics. To this end they’ve re recorded five songs from their last album, The Year Of The Horse unplugged with just the pair of them singing and playing along with five new songs. The latter kind of lose the unplugged concept for some reason but overall the album is a handsome reminder of why they have been awarded a Canadian Folk Music Award for Best Vocal Group and their regular UK tours generally sell out.

The album opens with We Are Famous, a new song that showcases all that is best about the pair. A simple melody on mandolin with slight keyboards and wonderful harmonies as they sing about a relationship that is falling apart it is simply wonderful. Thereafter the old and new songs alternate with their acoustic stab at These Ships following with a skip in its step and some impassioned singing. On the acoustic side Same Sun has a powerful acoustic guitar throb along with some pawnshop percussion while Ohio portrays the duo as a female version of Simon and Garfunkel on a song that sparkles as MacEarchen and MacIsaac redefine the art of harmony singing. Trouble finds the pair in a sixties folk mode with MacIsaac’s fiddle weeping away and again the harmonies almost hypnotize (and from here on I’ll not mention the voices, take it that they are wonderful throughout) while Operator is an update on that lonesome phone call desperate plea although here the singer is not looking for a loved one’s number but is desperate, alone and cold in the streets of Montreal.

They’re less sure footed on the new songs aside from the aforementioned We Are Famous. The Heat rumbles around a crisis of sorts but just kind of peters out with a repetitive chorus while How We See Love is a fine beefed up percussive number with bass, drums and lap steel enveloping the vocals but for this listener there’s a sense that the song would be much better if left to the duo’s unadorned style. Hush is that old chestnut variously recycled as Hush Little Baby or Mockingbird and they deliver it with a slight reggae pulse that is similar to the version recorded by The Horseflies many years ago. Finally, the album closes with a remix of These Ships that seems fashioned for the dance floor and, sorry to say, leaves this listener unmoved. Aside from their glorious voices the less they throw into the mix the better it is.

Almost unplugged but it’s the vocals that stand out.