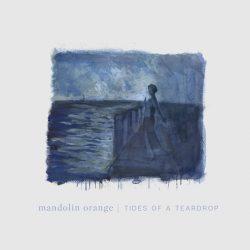 Andrew Marlin and Emily Frantz, better known of course as Mandolin Orange, have come a long way since their formation in 2009 and their latest album ‘Tides of a Teardrop’ continues in the same intimate vein that has served them so well over the last 10 years. Marlin lost his mother when he was just 18 and the main theme of this album is about letting go and finding peace, a process that for some people can take many years and that certainly seems to be the case in this instance. Thankfully ‘Tides of a Teardrop’ doesn’t fall into a cliched world of pain and hurt and the closest it comes with direct references to his loss is on Mother Deer (and that’s not a typo for the eagle-eyed amongst you who may have noticed the spelling!) where Marlin’s smooth baritone voice aided by Frantz’s beautifully understated vocals blend seamlessly to conjure up a sense of hope that they may one day meet again.

The album is packed with the usual smooth and delicate sounds that we have come to expect from Mandolin Orange over the years but in this case they recorded ‘Tides of a Teardrop’ with their full touring band and on tracks like ‘Golden Embers’ the sound builds from the sparse opening to a much fuller sound as the whole band adds more layers to the music as the track progresses.

This album will likely be something of a slow burner for many listeners and on repeat playing it seems there is always something new to pick up on, either in the lyrics or the arrangement and it’s all the more satisfying because of it.  ‘Tides of a Teardrop’ is greater than the sum of its parts with 10 solid songs adding up to an enjoyable 42 minutes of listening.

Music made for curling up to on a cold winters night