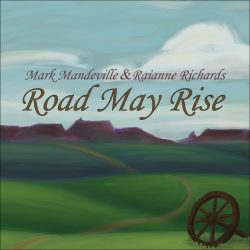 Mark Mandeville and Raianne Richards have contributed more than a decade to their love of American folk and country music, most recently offering ‘Road May Rise’, their third studio album recorded at Signature Sounds Studio, a staple of the Massachusetts acoustic scene. Upon first listen, Mandeville’s vocals draw phrasing similarities to that of Joe Pugs whilst Richard’s voice echoes a countryfied Susan Tedeschi, linking well as part of a harmonious relationship.

Opening with ‘There Will Come A Day’, it felt like the song lacked a little confidence in parts but it is soon put to rights as you dig a little deeper into the album. Harnessing some lovely melodies and stories of personal experience we are gifted with a sense of cohesion and genuineness as you listen on much in the same way you would expect to hear the songs live.

To note is the eclectic array of roots instruments on the record, the mandolin in particular from Doug Williamson sides well with the band in tracks like ‘As Long As It Takes’ and ‘Honey Bee’ as well as more unusual accompaniment on the clarinet that soothes the title track ‘Road May Rise’. Speaking of, written by Mandeville for a play performed at the Factory Theater in Chicago, it has been awarded an Honourable Mention by the Songwriters’ Association of Washington DC (SAW) and deservedly so – “would we carry on our shoulders all the burdens and the blames, and continue round our circles til the last laps of our days?”.

‘Little By Little’ is also a lovely stand out track cycling round the title, permeating those falsetto notes which can be heard along with the rest of the album on all major platforms, courtesy of Nobody’s Favorite Records.