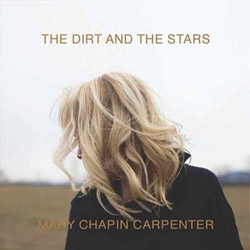 The Dirt And The Stars’  is Mary Chapin Carpenter’s first collection of new material since 2016’s ‘The Things That We Are Made Of.’ Her last record, ‘Sometimes Just The Sky’, which came out two years ago, saw her celebrating her 30-year career with new versions of some of her most loved compositions, as well as one new song – the title track.

It was produced by Ethan Johns (Ray LaMontagne, Paul McCartney, Ryan Adams, Laura Marling, Kings of Leon) and made at Peter Gabriel’s Real World Studios, in Bath. This time around, Johns is at the helm again – the new album was also laid down at Real World and recorded entirely live.

These songs were written at Carpenter’s rural Virginia farmhouse prior to the Covid-19 lockdown – she says they’re very personal and difficult, coming from places of pain and self-illumination, as well as joy and discovery.

On the opening ‘Farther Along And Further In’ she tells us: “There’s a crack in the armour, an opening. My heart seeing out and my eyes see in. Where they’ve never seen before”, while on ‘It’s OK To Feel Sad’ she offers some reassurance for these troubled times: “It’s OK to be sad. It’s alright to be lonely. You won’t always feel bad.”

Johns has captured Carpenter at her most intimate – there’s a warmth and tenderness to these performances, but the album is weighed down with too many hushed and understated ballads that tend to drift by without really doing much – there’s a lot of tasteful acoustic guitar and rippling piano. It’s a shame that ‘The Dirt And The Stars’ doesn’t have a bit more, er, dirt to it.

The upbeat and heavier moments are the highlights – the chugging, Tom Petty-like country-rock of ‘Secret Keepers’ – and the slick and funky groove of ‘American Stooge.’

With bluesy electric guitar and chunky Hammond organ, the latter is the album’s most political song and was reportedly written about US Senator Lindsey Graham: “When he’s not kissing the ring and levelling threats, he’s proud to be your favourite hypocrite. Polishing sound bites for the folks at home. A moth to a flame and a microphone.”

Final song, ‘Between The Dirt and The Stars’– another standout – clocks in at almost eight minutes and is a nostalgic ballad, which looks back at Carpenter’s teenage years – “I’m 17 and in a car, ready to ride anywhere” – and references the Rolling Stones’ ‘Wild Horses’, both lyrically and musically: “Over the radio. Wild, wild horses – everything you’ll ever know is in the choruses.”

An epic, stadium-straddling guitar solo dominates the second half of the track. It’s a most welcome diversion on an album that promises the moon and the stars, but doesn’t quite deliver.

US country veteran gets intimate and personal with a ballad-heavy collection of songs – competent and slick, but lacks edge