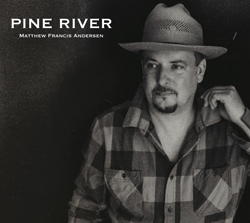 The third album by Chicago-born Matthew Francis Andersen is a collection of songs themed around a fictional town called Pine River. From the off, it feels like this is a place that’s very familiar and has been visited countless times before. “Have you got another bottle?” he asks on the opener, ‘Absolutely’, a tired, bluesy, country-boogie shuffle that sounds like it was found lying on the floor of a touristy bar somewhere in Nashville or Austin – the album was recorded in the latter city.

When Andersen sings “We’re calling you a taxi,” you can’t help but think that would be a great idea – let’s all pile in and get the hell out of Pine River and find somewhere more interesting to hang out.

Things do get, slightly, more appealing, although, ironically, the title track – a pretty, nostalgic ballad, with some lovely steel guitar on it, is about someone who did get the hell out of Pine River, but is now returning to the town, where they once left someone behind: “If it wasn’t for your mother, I might’ve stuck around this old neighbourhood…”

There’s some impressive and slick musicianship on ‘Pine River’. Andersen’s guests include drummer and percussionist Kevin Lance (Carolyn Wonderland, Fastball) and the wonderfully named guitarist/producer Gurf Morlix (Lucinda Williams, Warren Zevon) – the haunting slide on ‘It Just Does’ lifts what is a run-of-the-mill country song – but, as concept albums go, it feels like a very loose and unfocused one.

Willy Vlautin (Richmond Fontaine, The Delines) is the master at documenting the sad, dark and troubled lives of people in small-town America – unfortunately, Andersen doesn’t come anywhere close to that. Some of his songwriting is clichéd, obvious and one-dimensional – he never really gets inside the characters that live in Pine River, so the listener can’t relate to them.

On the lyrically clunky ‘When The Snow Flies’, we learn that Pine River is: “not a mighty piece of water, just bigger than a crick, but it’s far away from home, where the memories are thick.’’ Er, thanks for that one.

‘Newborn Surprise’ tackles the emotional subject of a young soldier in a war zone, who is worrying about whether he’ll live long enough to see the birth of his child, but the song is just too cloying to take seriously.

The latter part of the album is a slog to listen to, weighed down with dreary, acoustic barroom ballads. By the end, you too will be asking, “Have you got another bottle?” – if you haven’t already jumped in that taxi…

A loose concept album set in a fictional, small American town, where not much goes on - rather like most of the songs