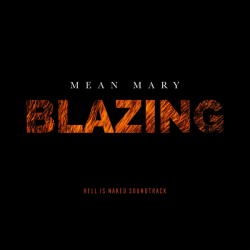 Mean Mary (Mary James), renowned multi-instrumentalist and lightning-fingered banjo picker, returns with her new album ‘Blazing,’ which is a soundtrack to accompany the novel she has recently written with her mother, Jean James. The novel, which is to be released ahead of her tour of Europe and the UK beginning, in August is based around a former cop using unconventional methods to investigate crime around the Hollywood scene.

Themes of suspense, romance and adventure are expected to be the order of the day in ‘Hell is Naked’ and are present in the songs written to accompany the novel. Mary James was apparently able to read music before words so it is probably inevitable that she would think in musical terms about the fiction she has written. It does have the effect of making you wonder how haunting tracks such as ‘Harlequin’ and ‘Rock of Ages’ fit into the plot and what scenes would accompany instrumental foot-tappers like ‘Lights, Gun, Action’ and title track ‘Blazing’.

Fans of Mean Mary will certainly not be disappointed as the distinctive vocals and banjo dexterity are very much in evidence and this time, there is a plot to follow too.