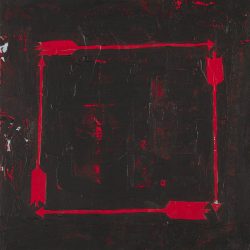 It begins innocently enough. The sound of musicians setting up, and given the album was recorded in 24 hours, it’s an apposite scene setting. Then it starts. If you’re unfamiliar with Hinson’s voice, think of the saddest, most mournful sound you can and double it, but even with that knowledge, he’s never been as jaded and forlorn as he is here.

Opening track ‘I Am Looking For The Truth, Not A Knife In The Back’ is weary, tired and a little angry. But don’t be perturbed, it picks up terrifically on ‘The Sleep of the Damned,’ its insistent organ and rolling bass driving it forward before the pace drops again for the brilliant prairie strum of ‘Fuck Your Wisdom,’ Hinson asking  “where are my rights, where are my wrongs, where are the things that don’t belong … why should I care if I don’t belong?” which did remind me of his apparent right wing leanings which, in a business that is predominantly left wing, makes perfect sense.

But it’s the beguiling ‘Small Spaces’ that makes one stop and think and perhaps gives the listener an insight into his reported Conservative views. “Don’t fit my god into small spaces, where he won’t know my shame or the way to heaven…” and it’s incredibly affecting, as enigmatic as it is, and I say this as an avowed atheist.

Ultimately, then, this is a startling record, sprinkled with apocalyptic imagery and with a Gothic country bent, its religious undertone calling to mind 16 Horsepower, and coupled with a voice suited to said imagery along with a fine way lyrically, and fabulous phrasing, it’s hard to find fault. But it’s the final track, ‘The Skulls of Christ’ that is perhaps its defining track. A miasma of sound, an aural accompaniment to the apocalypse maybe, giving way to a choir of uncertain words that is both unsettling and oddly soothing. In the end, it is a profoundly heavy and thought-provoking record.

Profoundly heavy and thought provoking record from the Texan