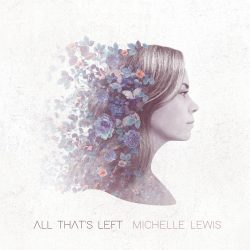 Michelle Lewis makes folk music. This is a broad and unhelpful description. You’re welcome! It’s true though that at the root of this record is a solo performer with acoustic guitar and a rich, sweet voice. However, Lewis infuses this simple, time-tested formula with subtle yet lush electronic and organic musical arrangements.

That doesn’t really take the ‘folk’ music into a poppy sphere, as you might expect, more so it occupies its own space between the two. Boston native Lewis possesses a voice not dissimilar to a young Rosanne Cash (this is a good thing). This is her third full length record. You’ll not be too surprised to learn that her songs often deal with poignancy, reflection and sadness – all good singer-songwriter fayre. Opener ‘That’s What They Say’ is a bittersweet ballad, opining about a relationship(?) that can’t be ended, although it should be. Titular track ‘All That’s Left’ follows in a very similar vein; this time the relationship is finally over. ‘Push On’ tells us to keep going when the road looks tough. It’s one of the stronger tracks here. There’s an interesting take on ‘Dancing In The Dark’; softened to fit in with the tone of Lewis’s song collection. It sits nicely here, with it’s theme of should I/shouldn’t I?’, though Lewis would be hard pressed to mess up such a good song. ‘Please Don’t Go’, one of the closing tracks, cuts straight to the chase – a dying lover, not enough time left together. It’s a real heartbreaker and Lewis is at the top of her game when she’s so direct. It’s a crowded field that Michelle Lewis competes in, but her skill and craft place her firmly amongst the front runners.

Well-crafted songs stretching out the space between folk and pop