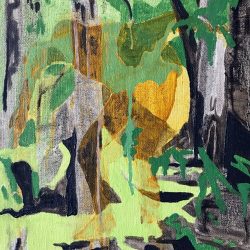 With its opening that feels like a lost track from Bill Callaghan on a song with Nicolai Dunger on the ‘Tranquil Isolation‘ sessions, the listener is immediately hooked. ‘Tamarack’ (the song concerned) is a delight that gently unfolds with stately vocals and the sweetest of piano highlights that play gossamerlike over the melody. So entranced are you that the chiming Youngesque guitar intro of track two ‘Walking Human’ comes as a real shock.

It is a close relative of ‘Words’ from Harvest but that’s no bad thing, although it is such a close relative one may be tempted to call social services! ‘Hardman’ returns to the acoustic figures of guitar and slow drum and bass arrangements; there’s lots to love here on a well worn path. Not as striking as the opener but still strong songwriting and crystal clear performance. ‘Before We’ ploughs a Drakelike dreamscape – that’s Nick not the chart bothering artist of recent years; here the voice again is reminiscent of Callaghan with the reverb just adding a spiritual quality. There are hints of America too as the voices play with the narrative. ‘Sleep’ is as cool as a feather pillow in a darkened room on a hot day – all picked guitar and reflective tones – a lovely instrumental.

And then something funky and twisty arrives -‘Monarch‘ all spiky guitar and spoken word – there is a hint of ‘Somewhere Down The Crazy River’ but this is deeper and darker with the rhythm hinting at voodoo and the strangled backing vocals adding to the dissonance. Very arresting.’Peace Song’ is traditional in comparison as a gentle hymnal – all harmonica and picked banjo – ‘For the Turnstiles’ indeed. The last three tracks take the album home with a flourish. The ragged ‘Rock and Sand,’ again recalling Young, this time,‘Dangerbird’ or perhaps Son Volt at their most stately. ‘The Myth of Forests’ retains the electric walking guitar and the spoken vocals and ‘Footpath’ finishes it off with an almost pastoral folk conclusion. Short and very sweet.

This Winnipeg recorded album feels original but doffs its hat to old-school local talent on the way to creating a lovely whole. Matas feels like a poet finding his way through music and this reviewer for one will be along for the journey wherever it goes as long as it remains as compelling as this fabulous piece of work. In many ways stunning. Go get some …now!