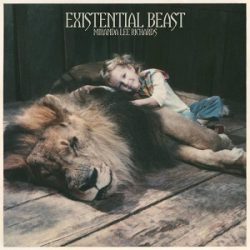 One thing that is certain, Miranda Lee Richards has created in Existential Beast an album of some astonishing beauty. Profound of lyrics, gorgeous in the playing, sung with a voice which embodies an unearthly allure. Every song has an emotional resonance, a soul satisfying lyrical depth, even as Miranda Lee Richards dances elegantly and effortlessly across styles, claiming each one as representing her own special musical affinity, before pirouetting to another with which she sounds as equally at home.

Opener Ashes and Seeds is moistened with sorrowful tears for the world bequethed by the previous generation, whilst shot through with a steel determination to make the attempt to wrestle the big problems down “Oh mother it bothers me this march with complacency / oh father have you heard about it all? / Well I didn’t make these problems / but by them I’m burdened” she sings. Even though Richards acknowledges that “history repeats and repeats” that doesn’t give her the choice to opt out of caring, or to choose easy solutions “Would that make me feel better? / To sign angry letters ? Endless causes arising from the spring / If I want to help start with myself”. It’s a rallying call. Follow on The Wildwood moves effortlessly from Ashes and Seeds‘ quiet thoughtfulness to a wild heavy folk-rocker: it’s like the anglophile Hazards of Love era Decemberists infected with the mellotron wildness of early Hawkwind.  It’s a groover, and Miranda Lee Richards is at her most vocally ethereal singing like a half observed dryad – alluring and somewhat threatening at the same time. Beautiful.

Golden Gate is a full dive into rock Laurel Canyon style, a blissed out piece of optimism – offering a vision of a beautiful world that’s there to be grasped…just reach out, it’s within touching distance. And then the song launches off into the stratosphere, arcing away across the sky as Richards offers a subliminal deprogramming from the weight of the world. It’s spiritual, but not demonstrably tied to any theism – other than hippy optimism, and optimism shouldn’t be seen as a negative thing. Other songs are equally mind expanding whilst being simple in structure – acoustic guitar filtered into a dream state – right up to the epic closer, the twelve minute confessional Another World. Through twenty two verses Miranda Lee Richards expounds her philosophy of a better world, and her fears for her country as it teeters on the brink of a descent into darkness “In God we can no longer trust / Defending the values of an old Republic / A crisis of consciousness”. There’s little doubt of what she is thinking of, what disaster is stalking the land of her birth “Robber barons and plunderers / Who take no prisoners / The jest is now upon us / We bow our head; by fools we are led”.  It’s simple music, but not simplistic. It illumines the danger, and shows the golden path out of peril. Another World is a bold and brave polemic, Utopian – yes, but is perfection such a poor thing to strive for?

Essential Beast is an album that grows and grows with successive relistens.  At first it seems just wonderful, a beautiful dreamy confection, but is soon revealed as both superb and subtly layered. Few albums as good as this pass our way – and this reveals that Miranda Lee Richards is just growing in her abilities, although the unimaginable better than this would have discerning music listeners fainting in the streets from the demonstrable beauty.

Existential Beast is a big, absorbing and sonically wonderful album. Miranda Lee Richards has created an image of perfection to strive for, and it is in itself perfect.

About Jonathan Aird 1342 Articles
Sure, I could climb high in a tree, or go to Skye on my holiday. I could be happy. All I really want is the excitement of first hearing The Byrds, the amazement of decades of Dylan's music, or the thrill of seeing a band like The Long Ryders live. That's not much to ask, is it?

Album Reviews
March 4, 2021 0
Traditional – styled in the now. It is often said that the only constant in life is change. Of course, this could apply to everything, including music, where fashions and tastes change, what was popular [...]

Album Reviews
March 4, 2021 0
A lyrical, musical delicacy. From Duluth, Minnesota, USA, Breanne Marie Tepler’s journey on the music scene began, as many do, as a solo performer with an acoustic guitar. After the success of her debut solo [...]
Album Reviews

March 3, 2021 0
Personal reflections and big vocals from Phoenix-based songwriter Johnny Ironsights is a Phoenix based artist who describes himself as “punk-roots alt-country” and if that’s not enough genres rolled together for you, his publicity also throws [...]
Album Reviews

March 3, 2021 0
Lots of potential, but not much of it realised on this album of mixed styles and influences. Kate Vargas claims  PJ Harvey and Tom Waits as her two big influences, along with Kat Edmonson. Edmonson [...]
Album Reviews

What should I do, Americana UK?

It’s been a slightly longer pause than anticipated since the last attempt to answer all conundrums posed in a song through the words of another song.  But here we are, back by the clamour of […]

Traditional – styled in the now. It is often said that the only constant in life is change. Of course, this could apply to everything, including music, where fashions and tastes change, what was popular […]

Over the years here at AUK we’ve come back to Utah based Drew Danburry time and time again, and it’s nice three months into 2021 to hear him revisit a song written and recorded originally […]

A lyrical, musical delicacy. From Duluth, Minnesota, USA, Breanne Marie Tepler’s journey on the music scene began, as many do, as a solo performer with an acoustic guitar. After the success of her debut solo […]

This is a timely release from publishers Bloomsbury, reflecting the book’s full title, ‘21st Century Dylan: Late and Timely’. As many will know, Bob Dylan will celebrate his 80th birthday on the 24th May this […]