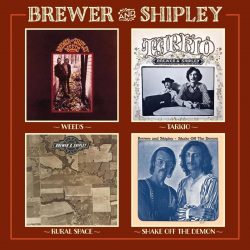 This is a fine compilation of four complete albums from the early seventies by duo Brewer & Shipley. Whilst they have much in common with similar vocal groups of the time, they differ in that they were not based in sunny California but preferred the Midwest, settling in Kansas City. Therefore the style is a little more rootsy than the smoother fare from CSN and the other LA balladeers which sets this compilation apart and for anyone not familiar with their work, opens a door into a whole new world of early seventies country /folk rock.

They are inextricably linked with the counter-culture due to an unexpected hit One Toke Over The Line with drug references which was released after rave reviews of live show performances. As is so often the case, after receiving criticism as subversives to American youth from the US vice-president of the time, Spiro Agnew this had the counter effect of making the song much more popular.

The collection comes as two CD’s and listening to the albums from the start there is a subtle but clear change of style with the last release of the set, Rural Space showing a musical maturity which just sets that album ahead of the rest. This features the superb Yankee Lady, a Jesse Winchester song telling of love and the ultimate yearning for freedom which is very much of its time. Throughout the collection there are references to the issues of the times including the Vietnam War and appeals to the young to keep the faith and to the authorities to see the light, especially in Oh Mommy with the following line: “I’m not a Commie”. One of the stand out tracks comes from the first album Witchi-Tai-To which takes the form of a Native American chanted mantra which develops from humble beginnings to a rumbustious finale. There are a few misses however, notably Dylan’s All Along The Watchtower and Jackson Browne’s Rock Me On The Water which are lacklustre and sound like the weak covers that they are.

Overall, this is an excellent collection showcasing the duo at their peak. It is accompanied by a booklet which has quite a bit of information although this writer’s copy was put together in somewhat of a jumble which did not lend to easy reading – there was much basic information lacking such as writing credits although, conversely, detailed information on the musicians on all tracks is given. However, in the end it is the music that matters and in that respect there is little which is lacking.