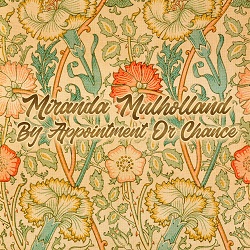 Miranda Mulholland has a gift for the co-incidental, and the very existence of her new album ‘By Appointment or Chance‘ is a reflection of this. It see’s Canadian Mulholland return to her folk roots for a while, recording a set of songs and tunes that have come to her mostly in personal ways – for example ‘Raglan Road‘ was one that she first heard in a pub in Dublin during a month off between tours with The Paperboys – and the venue for recording came out of a cat and house sitting offer from a promoter of one of her English gigs. That has turned into a ritual for the last five years, and since the house boasts its own micro-venue in the back-garden and since all the musical friends required to make the album just happened to be both in England and available then literally ‘By Appointment or Chance‘ the album came together. The chance element is further emphasized since the recording was very much live – including snatches of birdsong which open and close the album.

With Tara Minton’s harp to the fore, Anna McGarrigle’s ‘Heart Like a Wheel‘ takes on a Celtic reshaping, sounding gloriously like a nineteenth-century parlour song, plaintive and yearning. There’s a similar feel to the rendering of ‘The Old Churchyard’, using a version learnt by Mulholland from Jefferson Hammer which oddly, but not unpleasantly, plays down the religiosity of a song that is about rising to eternal life on the day of judgement. This is not, however, an album solely infused with an Irish sensibility across movingly sung ballads. Nothing could be further from those elements than the rousing and slightly disturbing ‘Black Diamond‘, written by Jordie Lane, which in its quite literal haunted presence feels as if it has escaped from a Harrow Fair recording session. A love song – a lust song perhaps more accurately – between a miner and a prostitute with a heck of a twist “In the third room on the top floor when it was all over she walked through the wall / I went back to the mine, back to the mine / I told the boys I’d had a hell of a time” Percussively driven along by Mulholland’s strident violin and vocal pulling on her lower registers, it’s catchy but certainly strange as it contemplates its secretiveness – “nobody knew, nobody was to know / how a miner’s and a hooker’s ghost’s love could grow.”

Showing a completely different sensibility is the pair of tunes ‘Hunt of Zax / Pirate Remi‘ which show off Miranda Mulholland’s fiddle playing wonderfully. These have a sombre grace to them – the first like a stately and slow dance tune found in an obscure tune book, the second like an elevated to greatness hornpipe, but they were actually written by Mulholland and Joe Phillips respectively. And with a lovely rendition of ‘The Parting Glass‘ a diverse album comes to a close. There’s much to enjoy across the nine tracks proper with strong ensemble playing not the least of it – there’s fine reshaping of familiar songs and just enough weirdness to keep the listener alert.