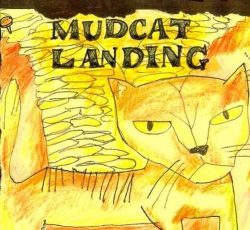 When you reach a certain age one tends to get sceptical of 20 somethings sharing their (limited) life experiences in a song. So, when the experienced Liverpool based 4 piece that makes up Mudcat Landing give us their insights wrapped up in a great musical package then it is time to celebrate the wit and wisdom of the well-travelled.

The EP has a deliberately live feel to it. The band eschew the modern tendency to produce records that favour the vocals over the music, preferring instead a mix that gives equal prominence to the guitars and drums that are such a highlight of this collection. Drawing comparisons with the mix and production of early Stones songs, the band wanted a sound that reflected who they are. The result is terrifically raw sounding music that still allows clever vocals and great musicianship to come together.

When describing their musical influence the band cite American southern soul and rock with some Neil Young type country to boot. They also highlight the clever and deceptively simple songwriting style of traditional country artists and those qualities are evident in all but El Camino Del Diablo, which is a terrific instrumental with some great guitar licks. Imagine Hank Marvin meets Sergio Leone.

There is a wry humour that runs through the other 4 songs. Drunken Angel tells that story that we all know of the loved one who, despite wanting to hurl abuse at the stupidity of a partner who should know better, instead focuses on looking after and dealing with the aftermath of a heavy session – ‘I’ll watch over you darlin’ ‘til the morning’s light, if you feel inclined to vomit I will turn you on your side.’

Guest Villain uses Columbo the detective as its influence. Your Right Was Wrong contains some great finger picking guitar work as it tells the story of the smart Alec who is always right and can’t but help ensure that his long-suffering girlfriend is aware of the fact. That clever country lyric influence is here again ‘Tonight you left ‘cos I was right’.

The band have a manifesto which thankfully bears no resemblance to those meaningless political versions. It also sums up perfectly these five songs. “We do original, fresh and honest music and we do it well. We enjoy it and are passionate about it. We do it primarily for ourselves. If other people like it, that’s a great bonus. If they don’t, well, we’re carrying on anyway!”

If you are fortunate enough to live anywhere within reach of the fantastically named Mudcat Landing then go see them!