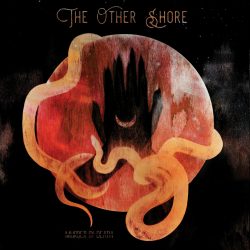 A space western concept album? Really?  Apparently so. Murder By Death have been releasing records for the best part of twenty years and this, their eighth album release, tells the story of two lovers choosing different paths – fleeing a dying earth or holding out on terra firma for something better. All said a bold proposition. Luckily for us, the record delivers as a solid set of songs, whether you choose to buy into the story arc or not.
The suite kicks off with ‘Alas’, a twangy country meets fuzzy stomping singalong of a tune. Almost all of the songs here are big and bold, as befits the subject matter. Musically speaking, Murder By Death throw the kitchen sink at their arrangements, but they get away with it because they don’t try to be too subtle. ‘True Dark’, the featured track/single from the record, is fast and furious – fuzz bass, keys, cello(?) and pounding toms warn that true dark is coming. It’s somewhat reminiscent of Green Day’s Holiday (but not to this song’s detriment). ‘Travellin’ Far’ is an exception to the big, bold rule; with mandolin and acoustic guitar foremost it’s more understated and punctuates the middle of the record well. ‘Bloom’ recalls the better aspects of Kings Of Leon, with added cello and harmonium breaks to add flavour. Final track ‘Last Night On Earth’ is the bleakest of late night musings, worthy of Nick Cave in subject matter and composition. It tells of the planet’s end, before the song (fittingly) musically breaks apart. It’s probably the standout track here.

Full-fat, bold brooding Americana. As befits the end of the world!