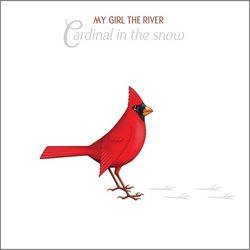 ‘Cardinal in the Snow‘ is the second album from duo My Girl The River, fronted by Louisiana native Kris Wilkinson on vocals and acoustic guitar and featuring her partner and bassist Joe Hughes, with contributions from their daughter Ruby, together with ‘A’ list session players from Nashville, where the album was recorded in 2019. The dozen songs on the album are all self- penned, with well-crafted lyrics, and Wilkinson’s fine vocals are the rock on which the collection stands.

The album features mostly mid or slow tempo compositions, but with a variety of arrangements, which maintain interest, while keeping a consistent thread around acoustic and electric guitars, with prominent steel guitar on most tracks signposting the Nashville sound. ‘Hot Chicken‘ has a funky New Orleans vibe, with Wilkinson’s vocals taking on a jazzy feel, while ‘Won’t Find Our Bones‘ takes us into Southern Gothic territory, where Wilkinson sings “Let the horses go/we don’t need ’em where we’re headed/drop your guns to the ground/they won’t save you now“. This song also features a contemporary take on vocal style, the refrain “I drink the whisky from the bottle/I’ll smoke em if you’ve got ’em/they won’t find our bones/not where we’re going now” delivered rap style.

Opening track ‘Something In The Water‘ strikes a softer note, with a dreamy feel, ethereal backing vocals, the memorable refrain “There’s something in the water/fill my cup/fill my cup” and a striking outro with a rap over backing vocals.

Contrasting notes are struck by ‘Christmas In July‘, where Wilkinson channels Patsy Cline, with maybe a hint of Cowboy Junkies styling, and ‘Slow Mover‘ where Wilkinson sings “Don’t expect me to kiss you/on the first night/and it might be a month of regret till it feels right” , her vocals displaying softness and vulnerability in the upper register.

For the closing track ‘The Last Branch‘ we return to Southern Gothic, the foreboding mood of the song reaching an unsettling climax, a fine ending to an excellent album.