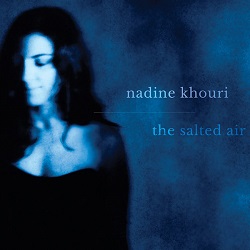 With a list of influences that are as broad as they are intriguing, the debut by Nadine Khouri, promises a great deal: interesting Lebanese heritage, production by John Parish (the chap that made PJ Harvey, messed with Giant Sand and confused Sparklehorse), all recorded in a dimly-lit Georgian vaulted basement in Bristol, and rendered with the help of Adrian Crowley, Parish and Emma Smith (of James Yorkston’s band)… the record doesn’t exactly scream ‘Americana’ from the rooftops, but I guess you should never judge a book by its cover (or a CD by it’s press release?).

In fact it teeters on the edge of Americana, opening amidst a melismatic, bluesy smog that is fascinating and oblique – acapella vocals, melting into a distant-sounding strings (think recent Scott Walker) before the ‘psych-folk’ of I Ran Thru The Dark offers a somewhat less bewildering relief… and so the record continues, meandering through Mazzy Star style ambience, Khouri’s breathy, gentle, tremulous vocals punctuated with almost painfully beautiful moments of fine detail (the acoustic guitar interludes within the title track by way of example are simply stunning). Elsewhere, the contrasting sharp focus of Surface Of The Sea, Catapult and the percussive rattle and hum of Shake It Like A Shaman (which could easily be a PJ Harvey outtake) make for interesting diversions.

Overall, however, a lack of warmth and a tad too much meditative incoherence define an album that struggles to connect. Sounding more like an record by a band trying to find their way than the work of a solo artist, “The Salted Air” is a work that is pregnant with potential, but more preliminary sketch than definitive work.

An album of intriguing, haunting ambience that ultimately lacks some definition, but could be indicative of great things to come.