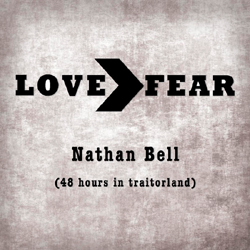 What to do when you’re a singer songwriter who, after a an early shot at fame petered out, spent a lifetime grafting in business before returning to the music world and slowly carving out a reputation as a commentator on the current stare of the nation only to find that, overnight, the world was turned upside down? Nathan Bell was comfortably ensconced in the (somewhat) hermetic world of roots music with a set of albums (his Family Man Trilogy) which saw him rooting around themes of family, work and middle age and which were noted to be following in the footsteps of Woody Guthrie, Dylan, Steve Earle, Guy Clark and Springsteen. Plans were afoot for the next episode with Bell wanting to delve into the intricacies of relationships and love surviving everyday issues but on November 8th 2016 it all went belly up.

Bell had already recorded some incisive songs that portrayed working class Americans who were effectively disenfranchised, no matter who they voted for. Meet the new boss, same as the old boss as The Who said. The farcical election of a millionaire who pretended to be a man of the people not only enraged him but recalled dark times when despots utilised populist discontent to gain power and then turned against those very same people. Bell himself comes from a line which suffered pogroms in Europe within living memory and so he set upon this album, a call to arms of sort. These are protest songs that are not so much “finger pointing” (as Dylan dismissed his competitors back in the sixties) as setting out a topography of those whose life’s were and are a struggle and who were beguiled by the promise of making America (and them) great again. Recorded in two days in January Bell, accompanied only by his guitar and harmonica, is not aping Phil Ochs in demanding an impeachment, instead he’s standing in solidarity with those who have had indignities heaped upon them. His anger and bile is reserved for those in power whose venality compels them to set aside any quibbles as they stand behind the narcissistic slobberings of the man who diminishes not only the position he was elected to but also the country he is supposed to serve. As long as they still have a snout in the trough they’ll ignore his tweets, his misogyny and his rampant disdain for the pillars of American justice. They are the traitors.

Over the course of eleven songs Bell demonstrates that he’s a powerful performer. His guitar and harmonica allied with his fine grained voice place the album alongside acoustic classics such as Springsteen’s Tom Joad and Earle’s Train a Comin’, there’s a real sense of passion rising from the songs. His writing encapsulates the American dream gone wrong as experienced by real folk with the opening The Big Old American Dream a perfect example. Here Bell parades in a series of short vignettes several sorry tales, a transgendered rodeo clown, a man driven to robbery to pay for medicine, a farmer whose land is repossessed by the bank. With its mournful harp and delicate guitar picking it’s up there with the likes of Guy Clark and a perfect introduction to the album. Bell has stories to tell throughout. One of the protagonists in Hard Weather can’t drink the water because it’s poisoned, The Long Way Down‘s character is “on the long slide to the bottom…sinking like a stone” while So Damn Pretty is an astute insight into the fate of women condemned to be praised for their looks rather than their achievements. He weighs into the rape and pillage of the environment by coal companies on Coal Black Water and on MIA unveils the plight of returning war veterans. The sense of displacement and trauma of the veterans is heard again on the closing Goodbye Brushy Mountain where Bell recounts the tale of a three time loser incarcerated for so long in the notorious Tennessee prison and so institutionalised that he fears the demolition of what he has come to call home sweet home.

In all of these songs there’s a tremendous sense of empathy with Bell inhabiting the lives of these outcasts. As he has said in an interview elsewhere, “If you’re gonna be a teller of stories, you better do it with love and honesty”  and for sure there’s a great deal of love here and in a way he has completed his proposed album of love songs and as the album title says love is greater than fear. However Bell isn’t content to chronicle the tales of the dispossessed and he offers a defiant manifesto on What Did You Do Today and on Traitorland (Rules For Living In Traitorland) challenging folk to stand up and be counted. Finally, he has an anthem of sorts in the powerful Raise Your Fist which he delivers with the soul and grit of a Southern civil rights call to arms. Inspired by the courageous Olympian sprinters who in 1968 enraged the American establishment with their black power salute on the winners’ podium it is angry and proud and as witnessed by this writer when Bell sang it live back in January is certainly rabble rousing.

Love > Fear (48 hours in traitorland) is an important album with Bell adding to the budding protest against the populist movements that threaten us all. It’s an aural equivalent to Grapes Of Wrath, Sullivan’s Travels, Michael Moore’s Roger & Me and even Orwell’s The Road To Wigan Pier. It sounds great but more importantly it impels the listener to stand up and be counted.

A powerful and inspiring call to arms