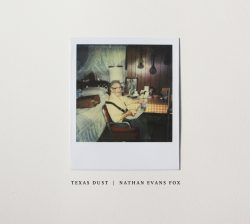 Nathan Evans Fox sounds like the truth. In the end, that’s what we go to songwriters for, isn’t it? That sense of themselves that reveals a glimpse of ourselves, too. Fox sings about his own family, grief and religion on these eleven songs. But he’s also singing about you. Opener, ‘Texas Blues No 7,’ is prime Tom Joad-era Springsteen with its austere and acoustic atmosphere – but it’s one minute and a half into the title track that a fiddle enters the picture and the music opens up as wide as the country Fox is singing about: “… and every smile that you sent me, had a Shreveport stamp.” It’s beautiful, evocative and paints western plains in the shades of one of the first technicolour movies. ‘St Louis’ and ‘Grief Song’ (there’s a theme) continue on the same dusty roads – you can feel the heat rising on these tunes – before the half a hoedown of ‘Corn Whiskey‘ lightens the load a touch.

But this is an album where to play, you’ve got to pay. ‘Texas Dust’ is worth the battle, though, especially on the lilting waltz of ‘South Pacific’ and the lesson in economy and harmony that is the gorgeous ‘Quicksand’ (“it’s hard to find a place to go out here where there’s more tyres than road… “). There’s lovely touches of mandolin, keys and a recurring female harmony from Lindsay Foote, but this is a songwriter standing alone and preaching his gospel.

To find new melodies in among well-worn chord sequences remains the toughest thing for a songwriter to find… well, after inspiration. Nathan Evans Fox has clearly found inspiration in heartbreak – and thankfully he found the right music to soundtrack his truth.

Wide open songwriting in search of the promised land and finding truth and beauty on the road.