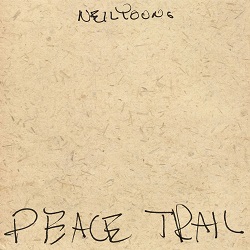 Peace Trail is one of those Neil Young albums that it’d be easy to dismiss as a failure of Neil’s quality control process.  However, like those who dismiss Greendale, Fork in the Road or Chrome Dreams II, that’d be a mistake – Peace Trail on first listen may sound overly casual and unfocused but repeated listens reveal that Neil Young has actually turned in an album of extensive depth and thoughtfulness. Maybe with the odd clunker along the way, but nobody’s perfect all the time. Built around a trio of Neil, “Lightning” Jim Keltner and Paul Boshnell it’s just a rhythm section and Neil blasting away on guitar and blues harp through a distorted microphone. This is definitely a new sound for Young, most of the time he’s playing a raucous blues, but his back up is almost jazzy in approach – if you thought you knew Jim Keltner as one of rock’s steadiest pairs of hands then be prepared for a surprise as here he’s had to get as loose as the band leader.

Opening with the title song, everything appears to be in very solidly familiar Neil Young territory – shamanic drumming, shaker percussion and buzzing guitar licks are coupled with lyrics about the “rainbow tee-pee sky” and connecting with old feelings and “hitting the peace trail”. Not everything is right though – old worries are arising again, things aren’t working out as they should and there’s a hint of future troubles when he sings that he “ain’t taken my last hit yet / I know that things are different now / I’ve seen the same old signs / but something new is growing” – there’s a subtle hint of vocoder emphasizing “new” which adds a strange disturbance suggesting that not everything new is good, which is underscored by the thought that “the world is full of changes / sometimes all these changes make me sad”.  Can’t Stop Working rambles around Neil Young’s continuing need to produce the new – pushing himself even when he knows he should “take some time off”. It sounds like a simple description of Young’s restless approach to making music, but it is also revealed as a distraction against having to think about his actions and their consequences for others – this is Neil Young encapsulated, a seemingly throwaway song which exposes a nugget of self-doubt.

As Peace Trail progresses there’s an increasing sense of experimentation – Texas Rangers riffs off a nursery rhyme melody with Neil’s singing taking on a semi-spoken free-form, almost rap-like, style as he mocks news agendas and the actions of law enforcement who see the explanations of their actions fall apart under cellphone footage. There’s more mockery on Terrorist Suicide Hang Gliders – what’s causing fear and a closing in of communities into untrusting and unsharing clans? Neil knows – “it’s all those people with funny names / movin’ in to our neighbourhood / how can I tell if they’re bad or good?”. Yeah, what could a rational person do other than arm up and close down? There’s a lot of questions raised by these songs – and others like John Oaks where an environmentalist can get shot by jumpy police for the crime of employing immigrants, or My Pledge where Young finds himself alienated from modern society and bewildered by the values of those around him.

This album is, although not obvious from the first listen, Neil Young’s take on the splintering, the disuniting, of the USA. Glass Accident sums up the negative effects of this shattering “Just imagine what could go wrong / and how some lives could change forever / If yer not careful how you handle / Delicate things”. Not as obviously as angry as an album such as Living with War, but Neil Young is still trying to explain how treating people differently doesn’t help, how demonising others doesn’t make us safer, and how a lapse into the security of consumerism is just a refusal to face facts. Still trying, but there’s the sense that he’s also wondering if anyone’s listening anymore – there’s precious little optimism on display on Peace Trail.

Neil Young critiques the modern-USA : it’s not always pretty, but then he’s clearly not describing the house beautiful.