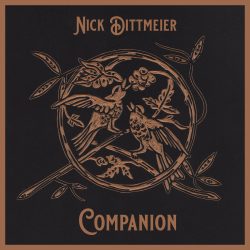 Nick Dittmeier, along with his backing band The Sawdusters, is renowned for constantly touring, so, like the majority of performing musicians across the globe, 2020 has been a hell of a year. To keep things moving, Dittmeier has released ‘Companion (Extended Edition)’, which is a combination of a previously released EP called ‘Companion’ (surprised?) but now with an additional bonus track, and a solo acoustic songs set, entitled ‘Alive From A Barbershop in Southern Indiana’. At first sight this title may have had some deeper meaning, but on further research, it appears the set was indeed recorded in a barbershop in southern Indiana.

Dittmeier and The Sawdusters are described as a blue-collar southern rock band and opener ‘It’s Gonna Break Your Heart’ supports this description, with a Whiskeytown-ish country guitar flavour, a song about resilience, about not giving up in the face of adversity….“It’s gonna break your heart/it’s gonna rock you to the core/gonna take a little time/get yourself up off the floor”. Yes, it’s all been done before, but this is doing it well. ‘Leaving Terre Haute’ is a song of true contradictions. Terre Haute the place itself is the home of the Indiana State University, a prestigious institute of technology but also the Federal Corrections Complex, notorious for being the site of the execution of Oklahoma City bomber Timothy McVeigh, as well as where government experiments on gonorrhoea were conducted in the 1940s. Dittmeier sings of contradictions in life, even referencing McVeigh, something he probably never thought he would.

‘Take It Slow is a little unexpectedly leftfield, a different sound almost bordering on psychedelia in the background, although still plenty of guitar, telling of growing from infancy into life. The final track from the original Companion EP, ‘Wildcat Creek’, the video for which was reviewed on these pages only recently, is an up tempo tale of one of those small towns everyone can’t wait to leave….but rarely does. Thigh slappin’ and toe tappin’, it looks an absolute belter live. The bonus track, ‘Light of Day’, returns the band to their strong southern rock styling, with slide guitar and organ a-plenty, an appropriate way to close ‘Side One’.

The live acoustic solo set – to be referred here to as ‘Side Two’ – is competent and well sung and includes a reprise of ‘Take It Slow’ from ‘Side One’, sounding different enough for the listener not to feel short-changed. Dittmeier engages with his audience well, who are politely appreciative, songs are well constructed, although nothing particularly outstanding, and act as quite a contrast to ‘Side One’.

This doesn’t really feel like an album, which of course it isn’t, it is two quite distinct entities, which is fine as songs and musicianship are of a good standard. But if anyone is looking for new Nick Dittmeier and The Sawdusters material this ain’t the place.

About Russell Murphy 39 Articles
Can't get enough of this Americana stuff. Live or recorded, it's all good to me....