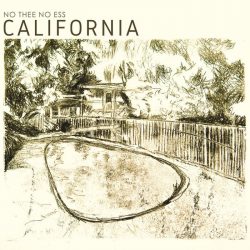 The Welsh psychedelic wizards relax the weirdness (a bit – the opener Mind Flow Bender is still far out into a universe where Hawkwind are a little bit tame) and head towards Americana. California (the title song) is all harmonies and restraint, the music remaining mannered, bubbling away without boiling over into a soup of noise but with enough seepage towards another dimension to keep things interesting. Florid Peaks is even gentler; it simmers, the vocal melody is full of sunlight and when we reach the instrumental interlude, again though, there are enough hints that things could get weird, so that they don’t have to, it can just be pretty without having to apologise for it.

There’s a woozy Black Mirror atmosphere to the songs, like there is something else, something twisted hidden away somewhere. This diminishes when they fall back onto more familiar territory like 1960 Alpha, which sounds like a theme from a lost Sci-Fi series. Then there’s also the beautifully naked She’s The One that busies itself in being an open honest love song with no need for ambiguity. It’s an open declaration, and the guitars and piano along with harmony vocals are all the decoration needed.

Wear Your Love / Salvia Plath is another simmering beauty, the aural equivalent of bouncing light off a laser disc, vocals a quivering, almost soprano melting into a haze of electronics, instruments I can’t identify, that I’m happy to float along with. It’s that kind of record, one to unmoor yourself and just give in to it.