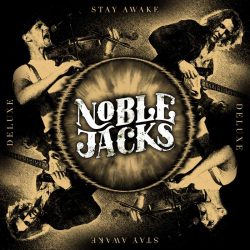 Noble Jacks are clear about their aim. They consciously create uplifting social music specifically intended to generate a feel-good factor in a live audience. This is the deluxe release of their second album ‘Stay Awake’ with an additional four tracks including a re-recorded version of the single ‘Enjoy the Ride’.

The band’s core comprises of Will Page on vocals and fiddle and Matt Deveson on guitar, who first met at university and bonded at once with a shared love of classic rock and folk punk. They describe themselves as a high energy alt-americana band from Brighton and have created a name for themselves on the festival scene with their live performances. Their style is redolent of British folk-punk and they identify The Levellers as having a major influence on their motivations to make music.

The album launches with ‘Ten Times’, an unrestrained anthemic alt-pop song featuring singalong choruses, a stomping beat and some great fiddle playing effectively setting the scene for the rest of the album. ‘Stay Awake’ overlays the twang of a country guitar onto drum based rock backing. The jangling guitars and foot-stomping rhythm of ‘New Beginning’ are strongly reminiscent of UK 90’s Britpop. Although ‘Enjoy the Ride’ sounds characteristically upbeat it contains a more reflective message “We wrote this song to promote positive mental health awareness, particularly for men to speak openly about negative thoughts with each other, following the suicide of our lead singer’s housemate at university”.

Overall this collection expands on their work and does well to capture exactly what you are likely to get if you go to see them perform. It is easy to imagine bouncing around in a field on a late summer afternoon to the strains of the Noble Jacks. The issue with producing an album to capture feelgood festival sounds is that it does not necessarily produce the variation and depth that typically makes for a great album to listen to at home. For the listener that likes a little misery in their music, this is unlikely to provide the input you are looking for, as it is reliably bright and uptempo. Nonetheless their endeavours should not be damned by faint praise, this is a solid collection that reflects exactly the fun you would want in a gig, demonstrating the band are highly competent and that their desire to connect with the audience is a noble enterprise.