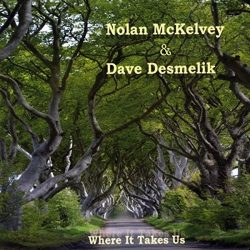 ”Where It Takes Us” is a product of 20 years of friendship, musical partnership and mutual support between these two veteran artists. Both Nolan & Dave have had long careers in various pursuits of roots music, both writing and performing anything from Bluegrass to Rock ‘n Roll. Whilst the writing for this record is a recent collection, there is a timeless quality that only hard miles on the road and experience can give an album.

The complementary vocal qualities of these two artists make for an interesting listen throughout the record, as does their different writing styles. The record kicks off with Imagination, penned by Dave. It feels more Rock ‘n Roll than the tracks following such as The Hanging, Roll Back The Clock and Letting Go Of The Weight which feel more classically Americana, both in the more acoustic musicianship and the storytelling meander of the writing.

Even in the rhythm that many of these songs adopt, there is more of a raw alt-country sound, and that is the real magic of the record. Whilst a few styles are explored they are all authentic to the artists, and both men complement each other beautifully.

The Disconnect is another song penned by Desmelik, and is much more sparse than we have seen already on the first half of the record. As an instrumental track, the picking of the classical guitar is quite jarring, and followed by the very low, dark piano tones there is a real change of atmosphere on the record. Being followed by The Bond the sparse atmosphere continues, with a very stripped back acoustic guitar and vulnerable vocals. Coming from the rich start to the record, these two tracks provide a rough and stark change in direction.

The more richly musical tracks are back towards the end of the album, with Solstice in particular being one of the most tonal and rich tracks on the record, with beautifully full guitar picking and piano backing. As another instrumental track, it is almost the representation of day to The Disconnect portraying of night. Pick Your Path then follows up as a country song, as rural as it comes on this record.

Where It Takes Us is a well-crafted record, with different American styles portrayed. The real magic comes with the vocal and writing differences between the two musicians rather than their similarities, and they come together to create something special.