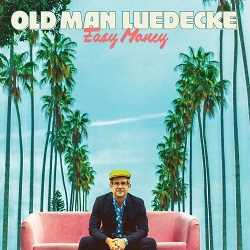 Old Man Luedecke is the performing name for Canadian singer-songwriter and banjo player Chris Luedecke who typically crosses a number of folk-ish styles in his music, and the new album ‘Easy Money‘ is no exception to that. It’s an album that takes a lot of inspiration from family, one way or another. The opening, and title, song is a banjo led light-hearted daydream of what life could be like if the money just rolled in – there’s no desire for a jet-set lifestyle though, no it’s more down to earth longings “I’m sure that I could spend my days / watching my children play / and getting them to school each day / I never stop dreaming about easy money”.

‘Dad Jokes‘ combines a musing on the downsides of middle-age and also emphasizes the effects of a lack of that easy money – instead of living that high life there’s always a hankering after a more that just is out of reach “when I fell for you my love and wooed and won your hand / I gained the key for us to be in the promised land / But then came renovations and we had to pick a floor . Ain’t it hard when all you want is more.” It’s tongue-in-cheek stuff, with a serious subtext.

There is, however no such subtext to the softly swaying ‘Sardine Song‘ which celebrates the king of toast toppers “both the landlubber and the fisherman / love the sardines that come in a little can.” It’s a sweet little number, but it does start to suggest that Old Man Luedecke’s world outlook is very much the same as the jokier end of folk-boom artist such as the Kingston Trio. Mid-album throws up a partial antidote to that thought in the shape of ‘Death of Truth‘ which carries on the family connections in as much as it draws on thoughts of Chris Luedecke’s news-junkie father – but it also reflects on the current obsession by certain politicians to deny facts and trumpet a distorted and hateful world view and yearns for a sane voice to talk it all over with. This seriousness doesn’t last though – ‘Lonely Country‘ is a bouncing little up-beat country love-song, whilst ‘Money Pit‘ is a calypso tinged hunt for buried pirate treasure. In this increasingly mixed bag of tunes there’s a few more surprises to come – ‘Le Ciel est Noir‘ offers a French language version of Dylan’s ‘Hard Rain’s a-gonna Fall‘ whilst the album’s closer ‘I Skipped a Stone‘ returns to the opening theme, but documenting the reality of getting the money in not such easy ways: being away from wife and family on tours, feeling disconnected and lonesome and then elated when some contact is made, even if just by telephone. It’s a nice and soulful heartfelt outpouring of love, given extra musical depth by the presence of the band Bahamas adding musical and vocal support.

‘Easy Money‘ has a lot of heart, how much it appeals will really depend on the listener’s appetite for gentle humour and songs that are hard to give a weightier description to than “fun“. Not that fun is such a small thing – as John Lennon said “fun is the one thing that money can’t buy“.

Not groundbreaking perhaps, but Easy Money is a solid album of banjo and guitar led folksong.