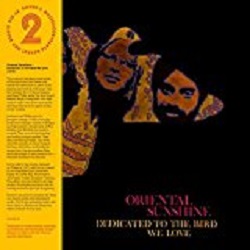 Dedicated to the bird we love is the debut, and only, album by Norwegian psychedelic folk band Oriental Sunshine. They got together in the heady year of 1968 – a trio consisting of singer Nina Johansen, tabla and flute player Satnam Singh and proud owner of possibly the only sitar in Norway Rune Walle. Fleshed out with keyboards and drums they were what could be called the Scandinavian Incredible String Band. Across eleven tracks on this vinyl only re-issue Oriental Sunshine lived the hippy dream to its full, painting guileless pictures of a beautiful world that was just coming into reach.With songs deeply embracing the culture of Indian wisdom and meditation they overcame any sense of naivety through their sheer dedication to this new, to western ears of the time, and revelatory way of living and being in the world.

The result is quite magical, Nina Johansen has a gorgeously open style of singing, and the enthusiasm for the revelations of a Krishna consciousness and a simpler way of living, makes songs like Unless compelling. Rune Walle’s sitar playing is suitably hypnotic and imaginative, never more so than on Land of Wisdom which exudes an aroma of patchouli whilst Nina softly pleads to have her mind expanded “Oh Rishi tell me about Krishna / Oh Rishi tell me about Jnana / I’m just like Arjuna in Bhagavad Gita”. Not that this is the only subject matter of the album – the lengthy Can anybody tell me is a perfect encapsulation of lost youth – lost in love, lost in confusion and lost in a quest for understanding of one’s place in the world. The song’s title forms a hanging question “and so I’ve lived my life / I walked the streets alone / Sleeping the night away / Can, can anybody tell me ?” whilst the music rises and falls and the organ swirls in a nebulous chaos. Visions is as stark a portrayal of separated, maybe unrequited, love as you’ll ever hear – that legendary Scandinavian melancholy seeping through to paint the world as an empty thing “then suddenly I see your long hair / though I know it can’t be you ‘cos you’re not there / my mind is filled with thoughts / and all without results / I am alone”.

This is a gem of a reprint bringing what crate diggers have turned into a sought after (and consequently expensive) album back into the realm of the affordable. It is much more than just a vinyl rarity. There is a crystal clarity to all the songs, and yes that prismatic light shines through but the layers of sombre reflection, and the beautifully crafted simplicity of the songs and the openness to new experiences are what makes this so special. Anyone who has any love for Tyrannosaurus Rex, the Incredible String Band or early Pink Floyd will want this.

Half-forgotten gem of the late sixties is given a timely reissue, just shy of its fiftieth anniversary, It sounds as fresh as if recorded yesterday.