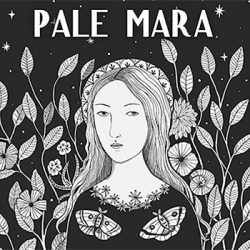 How best to sum up Pale Mara? By saying that the collaboration of Allison Robinson and Lee Godleski is an easy listen, does that damn this debut album with faint praise? The Cambridge English Dictionary definition of easy listening is “A type of music that is not complicated, serious or difficult. Quiet music that does not need much of your attention.” If that sounds a bit harsh how about this from The Collins Dictionary: “Music, either popular or classical, that is pleasant, tuneful and undemanding.”

But tagging an album with that label surely does not have to have the negative connotations that go with it. Suggesting that it is not complicated or serious is an insult to artists like Robinson and Godleski who have recorded an album of self-penned songs that has not only showcased their individual writing talents but, significantly, how well their vocals work together.

The writing and lead vocals are shared evenly with both artists fronting their own songs. Robinson is never better than on ‘Bird,’ a gorgeous track sublimely brought to life with a breathy vocal reminiscent of K.D. Lang at her compelling best. The song has a sparse musical accompaniment featuring Godleski on piano and it is a feature of the album that the mix of vocals to backing is in perfect balance, regardless of the style and feel of the song.

Godleski brings a slightly different feel to his songs with a soft vocal style that wouldn’t be out of place with all that originated from the sunny west coast all those years ago. Look no further than ‘I Think I Am a Phoenix’ for the supporting evidence for that particular comparison. It is a lovely listen with jangly lead guitar from David Kammerer demonstrating again just what a great mix these songs have even when the tempo is taken up a notch.

Coming in at a little over 30 minutes and with five songs of under 3 minutes this is not an album that demands too much of your time. It may not set many pulses racing but it has a warmth and sincerity about it that has genuine merit and is very easy on the ear. Oh, and that voice of Robinson’s is a really lovely thing.