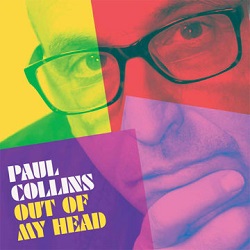 ‘Out Of My Head‘ is an unashamedly nostalgic album, hearkening back to a classic ’60s sound with jangly Rickenbacker, stomping drums and songs about music and girls and dreams of the future that should be taken at face value. It’s the sound of a British Invasion inspired band – not one of the top notch ones perhaps, this isn’t The Beatles, but certainly a Hollies or Herman’s Hermits (and who, today, wouldn’t kill for their rate of hit songs?). Paul Collins was the drummer in the Nerves, played guitar in The Beat (the American Beat, not the English Beat!) and has continued to play both instruments on a series of solo releases that have served at the altar of Power Pop – and all those influences are in play on ‘Out Of My Head‘.

Taking brevity as a virtue, several songs clock in at under two minutes – attempting the classic getting in, delivering the message and getting out again, jamming as much as possible into as short a space of time. A perfect example is ‘Go‘ which spurts out its concerns to an anxiety fuelled guitar accompaniment “you don’t want to say goodbye / all you do is make me cry” before concluding that “it’d be easier if you’d go, just go away“. Having finished with one girl, Paul Collins follows up with ‘Kind of Girl‘ which plays around with the emotions of getting your nerve up to go and talk to the girl, “the kind of girl you’ve dreamed of” before it’s too late “you’ve got your chance now but it’s slippping away / believe me you’ll see how you’ll regret it some day”. Seems like Paul’s advice isn’t so hot, as the next song is the minor chords and handclap drums of the self-explanatory ‘Just Too Bad You’re Leaving,’ with Collins’ voice full of emotion as it all falls apart…again. It is pure ‘60s pop.

There is a slightly darker side to the album, ‘Killer Inside‘ is a grooving and moody speculation on humanity’s baser feelings “part of you / a part of me / the part that nobody else can see / you walk around like a loaded gun / don’t you know you’re not the only one.” It has a bit of an Animals feel to it. ‘Lost Again’ is a perfect slice of dreamy psych-pop, laid back with a jazzy guitar part, its wandering motif echoing a mood of disconnection and despairing listlessness. Stretching out to four and a half minutes it gives Paul Collins the space to build up a really nice combination of instrumental parts and harmonising vocals. So much more than a pastiche of older styles, ‘Out Of My head‘ embraces familiar sounds and creates new perfect little nuggets to enjoy.

It's deja vu all over again - but the good kind.