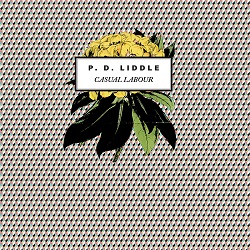 It was back in 2015 that Dry the River broke up, and PD Liddle was of course the lead singer with that band which were frequently associated with that other London based folkesque band Mumford & Sons, despite sounding not a lot alike. Dry the River were a much folkier sounding band and not surprisingly there’s more than a hint of that same sound on PD Liddle’s first solo release ‘Casual Labour‘. It’s a collection of songs that has been put together bit by bit over the last few years, recorded in odd free moments, before finally coalescing as a fully formed album.

Sung with a high and trembling vocal ‘Casual Labour‘ often sounds like a man barely hanging on in situations that have unravelled around him. Life’s not good on ‘Good‘: “tell me it’s good / that we are through the worst /…/ I don’t notice anything anymore”. The sprightlier ‘Naica‘ makes a claim for actually feeling ok “far from hallowed hallways where they tell us what to do …we’re alright, yeah” but then cuts this away with the confession that “I’m trampled by indifference / … / these days I barely register the carrier of woes“. This is the genuine lo-fi bedsit singer-songwriter angst, but it’s leavened with enough traces of the upbeat that ‘Casual Labour‘ retains the listener’s interest. ‘Uncanny Valley‘ has doom-laden rumbling electric guitar that gives way spirited upbeat drumming that carries a faint echo of the perpetual student outlook which inhabits the music of Belle & Sebastian, especially on lines like “you and I know we can work it out / while everybody’s out at the disco carving out a name for themselves“. You can feel the halls of residence closing in.  There’s a more listless abandon on ‘Excalibur‘ where, as a string section starts to soar a joyless scenario is laid out for the listener “take me to bed again / you know my medicine babe / nothing too rough / but I guess that the ‘cuffs are ok“.

‘Casual Labour‘ is anything but a casual listen, but it pulls the listener in to catch every turned and nuanced phrase. It’s modern-folk, and despite the appearance here and there of banks of strings the mood stays, like a rabbit caught in headlights, at the desperate end of the spectrum. Life isn’t always a laugh though, and PD Liddle’s music isn’t afraid to say so.