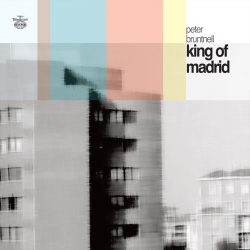 Flicking through a back catalogue of reviews of Peter Bruntnell albums – and ‘King of Madrid’ is his tenth – a hefty proportion are seemingly dedicated to dreaming up new ways of insisting that the Devon-based singer-songwriter is British Americana’s best-kept secret, the sub-text of the argument presumably being that only the inexplicably fickle tastes of the record-buying public/international music industry/whichever gods secretly rule the universe of popular music have deprived Bruntnell of the star status he so richly deserves.

To be honest, it’d be tempting to swim against this tide of opinion purely to be able to say something different. But actually, when listening to one of his albums for the first time, as was the case of this reviewer with ‘King of Madrid’, it quickly becomes blindingly obvious why the critics are so baffled he’s not more widely rated.

From the opening ‘Broken Wing’, which soars so gracefully through a mesh of jangling, pop-flavoured guitars it risks stealing the show from the title track –  and indeed the rest of the album – to the curtain closer, a troubling reflection on the parlous state of British Brexit-obsessed politics called ‘National Museum’, if previously there was near-unanimous agreement that Bruntnell’s usual standard was never less than excellent, he certainly hasn’t dropped the ball on ‘King of Madrid’.

For one thing, Bruntnell’s lyrics are so striking they probably merit a whole review in themselves. ‘Broken Wing’s analysis of a young person trying to escape from a fundamentalist cult, for example, plunges you into the heart of a harrowing mixture of self-doubt and desperate hope, right from the very first line: “I’m going to change my name and start again.” Strengthening the connection between the religious lyrics and music is the inspired (pun fully intended) addition of a mournfully tolling lone church bell on the  synth-led intro. Then the guitars blast in – exhilarating, bleak and hopeful in equal parts – and ‘Broken Wing’ lifts off for good, flying so beautifully it fully belies the song’s own title.

Equally, ‘Memory Hood’ offers some unsettling insight into how getting overly nostalgic can prove self-destructive in the present:
“Back before the years slipped down, I pulled the roots from the ground, didn’t know they were holding the town, back from sailing away.”

What gives ‘Memory Hood’ added power – and it’s maybe this ability to fuse lyrics and music so well that allows ‘King of Madrid’ to pack such a punch across the board – are its well-timed changes of pace, reflecting the lyrics’ wayward lurching between the past and the here and now.

These are just two examples, but the truth is track after track goes past on ‘King of Madrid’ and there truly don’t seem to be any low points. It helps greatly that the understated nature of Bruntnell’s voice matches the wry, unpretentious content of the songs so well, even in a composition as romantic with a capital R like ‘King of Madrid’. It’s a gentle, jaunty country-drenched ballad with some touching personal images of the object of his affection:

“Don’t want to breakfast alone, I’m just waiting til you get here, to walk up the steps, with your grown-out roots, lifting your hemline, over your worn-out boots.”

On an album where there are more touches of Americana sounds than full-blown dollops, the title track is where the country resonances are strongest, and for some reason on this track, (and it’s not that we’re complaining) the voice sounds oddly similarly to Jakob Dylan at his hoarse, hauntingly mournful, best.

Everything’s got limits though, and if you’re looking for a raunchy or sensual album ‘King of Madrid’ is probably not for you. Bruntnell is seemingly more interested in exploring the boundary between feelings and thoughts than going into emotional overdrive, and the result is maybe closer in spirit to the Beatles than the Stones – there are distinct echoes of ‘Daytripper’ on ‘Dinosaur’,  for example – more  strong cup of tea in an English garden at five pm than straight-up Bourbon in some boozy New Orleans watering hole at three in the morning. But that doesn’t make ‘King of Madrid’ any less appealing, because from whatever angle you look at it and however you want to put it, this album is in a class of its own.

Raises an already excellent bar to even greater heights