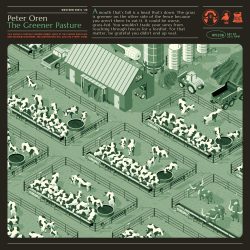 Peter Oren’s latest album ‘The Greener Pastures’ with its mentions of death, being fenced in, loneliness, isolation, phone dependence and its overall melancholic tone, could be seen as a prophet and seer in this age of Covid-19 as the album was recorded before the coming of the virus and it seems all too prescient.

Then again it could just be a coincidence and it could be about cattle for as Oren himself says about the album “As cattle’s comfort is often forgone” and there are songs such as ‘Stud Song’ that seems to be sung from a bull’s point of view with lyrics such as “A field full of fine heifers” and other titles such as ‘Don’t Eat Their Feed’ and ‘Fences Ranchers And Cattle Prods’. There’s also ‘The Greener Pasture’ where Oren sings about rotating the herd every few days.

However, one of the problems with the production of the album is that on too many tracks the vocals are either so low in the mix or drenched in atmosphere and reverb that you can’t hear what Oren is singing. He has a fine baritone voice but at times he seems reluctant to bring it to the fore and allow the lyrics to speak for themselves. Whether it’s actually about the existential fear of a coming disaster or just about cattle and farms, it would have been nice to have been able to hear more of the words. It seems that ‘The Greener Pastures’ is full of metaphors and allegories – it’s a shame the listener can’t hear them properly. This could be because Oren recorded the album alone in a cabin in Nashville and he mixed and mastered it himself and it sounds as if it could have done with an outside producer making sure Oren’s voice was heard properly, as he obviously has some interesting things to say.

Apart from the vocals, the overall production is also a bit mixed (pun intended) with some tracks over-saturated in atmosphere that make them sound a bit muddy whilst others are as clear as a bell. He’s ably backed by Dan Bailey (drums), Mark Edlin (drums), Shannon Hayden (cello), Aaron Goldstein (pedal steel), Laur Joamets (guitars) and Diederik Van Wassenauer (strings) and others who were not only in different places such as Los Angeles, Toronto and The Netherlands but Oren hadn’t even met some of them!

‘The Greener Pastures’ is a curate’s egg of an album that seems a little confused as to what it’s trying to say. It’s all a bit odd starting with the cover which looks like a screenshot from a farm in a computer game like The Sims. It also has a message on it: “A Mouth that’s full is a head that’s down. The grass is greener on the other side of the fence because you aren’t there to eat it. It could be worse, grass-fed. You wouldn’t trade your sores from reaching the fences for a feedlot. For that matter, be grateful you didn’t end up veal”.

As they used to say at the start of the TV programme “Soap”, ‘Confused, you will be’!