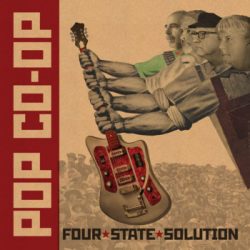 I like records that start with a swift kick to the ears. Pop Co-Op waste no time with If Everything Was Easy – it jackboots with a stuttering drum and a mighty burst of guitar that sounds like J Mascis in his prime squirting his squalling guitar all over Buffalo Tom. It helps that they also find a chorus to show that it’s not one-dimensional – oh but that guitar, my faint heart. They spend the next 11 songs seemingly attempting to make it sound like a compilation album. I Didn’t Know is all Andrew Gold polished soft rock, then Feint of Heart aims straight for Nashville and lands slap bang in the centre. That’s what happens when you have four songwriters and vocalists.

Perhaps what you wouldn’t expect is a kind of Stars on 45 paean to the 1980’s with When Wave Was New which crams in mentions, pastiches and quotes from a diverse constituency from Depeche Mode, Devo, REM, XTC, Talking Heads, Nena, Altered Images, B-52’s, Violent Femmes and a host of others. It sits alongside gentle Beatles sound-alikes and sometimes it seems that Steve Stoeckel (Spongetones) and friends are showing off their songwriting chops. A Trick of the Light is a piece of gentle psychedelia that sounds like it is a paint by numbers pastiche. It sounds gorgeous, a dope haze of a song that has been synthesized from hundreds of others. Bad Idea is their rock song and It Ain’t Easy Being A Boy is 60’s sounding romp that channels The Who.

The Pop Co-Op really do have a mastery of the building blocks of a song – this record sounds like a calling card for a job in the Brill Building (or whatever the equivalent now is). There are moments when they transcend the genres that they magpie. It’s a fun record with a couple of tracks that are worthy of repeated listens and the strange When Wave Was New is preposterous and kind of genius at the same time.