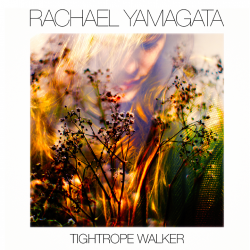 Rachel Yamagata can boast a who’s who of past co-conspirators – Ryan Adams, Bright Eyes and Ray Lamontagne most notably. To consider her purely on those terms, though, would be quite the disservice. Tightrope Walker is her fourth solo record; the first after a long gap of five years. Her muse for the project was Phillipe Petit – the infamous French high-wire artist who crossed between the Twin Towers in 1974. Petit’s reasoning behind the motivation for his feats, essentially ‘just because’ informed Yamagata’s songwriting raison d’etre –why not just quit? Why keep persevering? Just because – that’s why. It’s what musicians have to do!

Echoes of bands such as Texas occur here and there (Let Me Be Your Girl), sonic touches reminiscent of early Portishead and Goldfrapp spring up too, particularly with the titular opening track. Yamagata has one hell of a voice; dark and dramatic like a blues or jazz singer from the Fifties, which perfectly suits the ten songs on Tightrope Walker. She’s delivered a blend of grown up pop with occasional splashes of twangy and acoustic guitars amidst subtle electronic beats, bleeps and squiggles. It’s certainly got commercial appeal , whilst retaining a gravitas that prevents commercial sliding towards lightweight and disposable. Black Sheep – a more ‘conventional’ slow Americana ballad may well be a favoured track for folks hereabouts, but it’s an exception to the record’s thematic rule. Tightrope Walker as a whole improves with every listen. It’s a grower for sure.