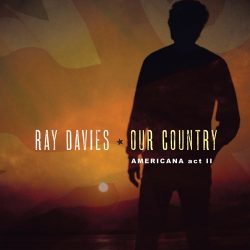 ‘Our Country’ is the follow up to Ray Davies’s first Americana record which was itself preceded by his like-named memoir. The two albums’ artwork are identical other than the original Stars & Stripes silhouette replaced by the Union Jack, and this album has a sense of saying goodbye to a country Davies had long called home. The history of the Kinks in the US was mixed, including the ban for half of the 60’s which blew their chances of joining the British Invasion. Considering that 2004 brought the New Orleans mugging where he was shot and nearly died, he could be forgiven for cynicism, but bathos is the main theme here, even ennui?

So Davies has a lot to say here, but unfortunately not the songs to say it. Most American musical idioms get a snatch of tune – broken up frequently by Davies’s narrations, hammy in places, trite in others – but these at least give the listener a break from his continuous attempts to reach the note in the bland offerings. The album is rescued by The Jayhawks essentially being the backing band for the whole album, and being pushed high up in the mix, with some excellent varied guitar licks – Gary Louris to the forefront – and even Karen Grotberg duetting on ‘The Real World’. But even with the Americana veterans so heavily involved, and the album so specifically titled, this is not an album that fits the genre of Americana, more an album of American nostalgia as artefact.