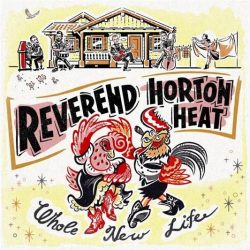 The good Reverend has been ploughing the furrow marked “furious rockabilly based rock ‘n’ roll” for decades now, and while this new offering is no game changer, it does carry the listener through its generous track listing on a glorious wave of exuberant, tightly constructed, wonderfully performed songs. Opening with the title track ‘Whole New Life’ the template is clear. This album is going to be a blast and despite the stylistic conventions being applied, each track is clearly defined and independent. ‘Hate to Cry’  drops the pace but not the intensity; similarly, ‘Don’t Let Go of Me,’ where the reverb is turned up on guitar and vocals to create a moody, desperate love song.

This is not as dark and twisted as the Cramps but it has a similar intensity of attack towards the musical form. The Reverend and his disciples (now featuring keyboards) are not taking any prisoners!

‘Ride before the Fall’ reeks of the Shadows with keys, and as an instrumental is compelling, particularly as the whoops and hollers of the band punctuate the track. There is real joy here.

The album finishes with a breakneck version of ‘Viva Las Vegas’ that tips its hat at all the influences that fill this album, as well as clearly marking out the Reverend’s independent style. Dig out the drainpipes and hit the dance floor.