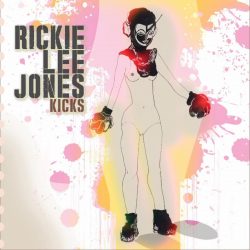 This is Rickie Lee Jones’ fifth covers album if you include the ‘Girl at Her Volcano’ EP, following on from 2012s ‘The Devil You Know‘. As usual ‘Kicks‘ mixes ’70s rock covers with some jazz and standards. This one feels more of a mixture than some of her previous entries. The song choices are interesting, starting with one of her best ever cover versions in ‘Bad Company‘ featuring some fine electric guitar work from Jones herself.

Elton John seems to be flavour of the month on covers albums, and we have ‘My Father’s Gun‘ from Tumbleweed Connection here. ‘Houston‘ best known for Dean Martin’s version is given a typically Jones makeover, in fact so far so Rickie Lee Jones all round. She was clearly thinking of Dean Martin as the next song is ‘You’re Nobody till Somebody Loves You‘, as Les Paul and Mary Ford might have played it.

Jones channels her inner Manhattan Transfer on ‘Nagasaki‘, and on ‘Mack The Knife‘ acknowledges in a lyric change that no one has sung the that song better than Louis Armstrong. Steve Miller’s ‘Quicksilver Girl‘, Skeeter Davies’ ‘End of the World‘ and Johnnie Ray’s ‘Cry‘ round out the album. “It is all part of what I heard growing up,” says Jones in the accompanying press release. “The radio played everything! Indeed, the whole album feels like a jukebox and doesn’t have the musical unity of her best covers record, ‘It’s Like This‘.

This is very much an album for the Jones fan who revels in her eclecticism and contrary way with a song. The uncommitted should perhaps try ‘It’s Like This‘ or her first album from 1979 and work their way back to this one.