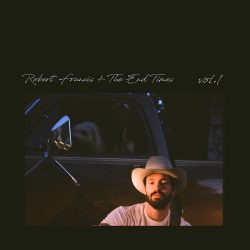 ‘Vol. 1’ is a curious title for an album by an artist with such a long track record, giving fair warning that there is a new avenue that Robert Francis is going to explore. With the release of ‘Amaretto’ and ‘Vol. 1’ being only months apart it is perhaps inevitable that there is relationship between these two records. The former is Americana recorded in Nashville, the latter is firmly rooted in nineties indie-rock.

It was when he was driving back to L.A. that the idea for Robert Francis and The End Times took shape. “I was in the mindset of the BMG deal, where people were telling me ‘This isn’t big enough’ and things like that,” Francis says. “I’ve a long history of telling people like that to fuck off. Maybe it was time to adopt a new persona … I kept thinking, if people don’t like these songs, I’ll just write some more. And by the time I got back to L.A., I had pretty much the whole album written”. “I can’t make any promises to deliver a record that anybody else wants,” he adds, laughing. “I tried to make a big rock record and it still ended up sounding like me.”

Accompanied by guitarist Drew Phillips, bassist Shane Smith, drummer Brad Cummings, harmony vocalist Cori Elliott, and multiple guests, Francis booked several weeks of recording time at Total Annihilation, a punk-rock studio in L.A.’s Lincoln Heights neighbourhood. “I’d been doing a lot of listening to the records I grew up with, from the Replacements to the Gin Blossoms,” he said in the initial album announcement. “I was going down memory lane and falling in love with that kind of music all over again, without letting my insecurities get in the way. I wasn’t wondering if the new songs sounded too country, too rock, or too Americana. I was just embracing this form of heart-on-sleeve, nostalgia-driven rock ’n’ roll.”

The opening number ‘Somewhere Trains’ tells you exactly where he is at. The opening falsetto vocals are immediately reminiscent of Radiohead or Coldplay before he launches into full anthemic chorus. The combination of quiet verse, loud chorus is tried and tested and there is a good reason why it’s so successful – it sounds great. ‘Coast’ is the catchy single off the album, ‘Built to Last’ is another powerful song firmly embedded in American rock tradition. “They don’t make them like they used to, honey I was built to last”. ‘What it’s Like’ is another driven rock song that will recall earlier classics by other artists.

You can’t fault this album but you may not love it – it’s lively and fresh, the band are having fun, the sound is entertaining but not necessarily revelatory. This is a highway that has been trodden before but there is no reason another artist cannot enjoy such a classic view – not every journey has to provide the exploration of new landscapes. It has subtle nods to Americana throughout but remains rooted in American rock. Nothing is undertaken in isolation, if you want Americana, listen to ‘Amaretto’ – it’s a solo Robert Francis album, if you want rock and roll, listen to this, it’s a band album. One thing is for sure, Robert is not short of drive and determination. The title of ‘Vol. 1’ is a statement that he doesn’t feel obligated to do what the industry expects of him and that can only be a good thing. Here’s to ‘Vol. 2’.