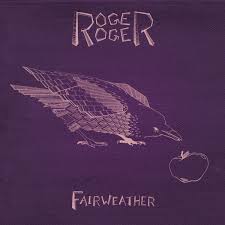 Twins Lucas and Madeleine Roger, a folk/roots duo from Winniipeg Canada, launch their debut album Fairweather which, to complete the family connections, was engineered and produced by their father Lloyd Peterson. Fairweather showcases songs that incorporate the styles of both of the siblings and certainly indicates a real potential. It also shows that they are capable of a range of styles as they generally alternate lead vocals throughout which lends an interesting structure to the album.

Lucas and Madeleine have not always played together, which may explain the difference in sound as Lucas has a background in Winnipeg rock and roll band Modern Man. This is evident in his first contribution of the album, Mad Trapper. A raunchy rocker which, despite veering alarmingly into Bon Jovi territory at times, is a good counterpoint to the more folk-pop sound of Madeleine’s songs. Album opener 13 Crows is an accessible track, melodic and showcasing perfectly the harmonies that add a genuine chemistry to the sound of Roger Roger.

Think of Me and Another Girl’s Shoes are irresistibly catchy and demonstrate that Madeleine has a voice of real potential along with an ear for an infectious hook. Possibly some lyrics may need a little more thought but there is no denying the real promise of this partnership.

Title track Fairweather is a stripped back pondering on those who see their glass as permanently half empty while Dead Horse Creek is a reassuring hymn to small town life – “it’s Hollywood to, it’s Hollywood to me” and both show a sensitivity to sit alongside well-crafted melodies and vocals by Lucas.