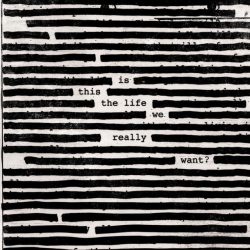 If you are a Water’s fan – be it ‘Amused to Death’ or ‘Pros and Cons’ or a Floyd fan particularly of ‘Animals’ or ‘The Wall’ then you are going to really enjoy the musical tropes explored in this angry, reflective, world-weary and ultimately affecting album. If you are new to this music then dive in, the Water’s fine. Teaming up with Nigel Godrich appears to have both edited out raging Roge’s more self-indulgent moments as well as, amongst other things, encouraged more of the ‘found sounds’ that appear throughout the work. Lots of BBC voiceovers from the 70s, the speaking clock, bagging area announcements and, of course, Trump.

Roger still enjoys his use of the vernacular at every opportunity but his spleen riddled lyricism is punctuated by some gorgeous orchestration as well the usual strong backing vocals he plainly enjoys. There are hints of Radiohead and Muse in the production and direct nods to ‘Welcome to the Machine’ in ‘Picture That’ and ‘Dogs’ in ‘Bird in a Gale’ and these all combine with some outstanding musicianship to build an increasingly powerful message of rage and impotency at the seeming overwhelming tide of despicable human behaviour. Jonathan Wilson (him again!) has now graduated from fan to collaborator and provides a clear musical foil without histrionics.

The album closes with a typical list song of Roger’s observations ‘Part of Me Died’ that leaves the listener not only wanting more but also moved by the experience of the whole, the last note appearing to die mid-sentence.

This is not an easy listen but it is, in that classic sense, a listen. You put the needle in the groove and you listen from beginning to end. A novel concept in these days of cherry picking soundtracks to life. Go buy, listen, get angry, do something!

Invigorated by anger Waters delivers best work since the 70s

1 thought on “Roger Waters “Is This The Life We Really Want?””