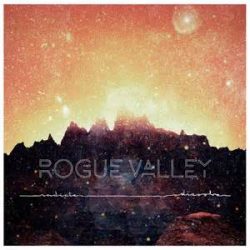 Rogue Valley, the Minneapolis-based outfit who burst onto the scene like the brightest of comets with their Seasons project, return. Like the afore-mentioned comet, the band haven’t been sighted on the new release list for nearly five years, yet this return is worth the wait. In 2009-10, Rogue Valley, led by Chris Koza, hit on the idea of releasing four albums in the same year to reflect the different seasons which they did to widespread acclaim. The albums shimmered and sparkled with originality and achingly beautiful moments and the new offering, Radiate/Dissolve, picks up where the Seasons project left off.

The time taken over this album has clearly been well-spent with a batch of songs that range from reflective to anthemic.  Radiate/Dissolve also sees a progression with keyboardist Linnea Mohn taking lead vocals on three tracks, including the sublimely unsettling Blood Moon and the dreamy Pulse. Mohn’s voice is a perfect fit for the haunting tracks on here and it’s tempting to speculate that future work may see further use made of it as it is a huge asset.

Koza is a richly talented song-writer and Radiate Dissolve provides ample evidence of the range of styles from the opening acoustic-electric sweep of The Brightest Stars to the shimmering close of Radiate Dissolve. There is no shortage of clever guitar work best exemplified in Breathe and Bury your Heart but also subtle use of a horn section which adds further depth to the arrangements.

The stand out moment is the towering Loom with its sublime, country-tinged melody and harmonies but the whole album is a very strong offering and indicates that Rogue Valley could be heading for a much wider audience in the future.