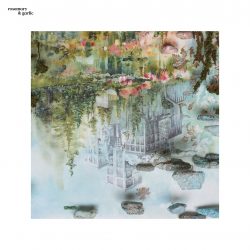 How the Dutch duo of Anne van den Hoogen and Dolf Smolenaers came up with the name Rosemary & Garlic is anybody’s guess.  Suffice to say that this own goal is best overlooked as it is the only aspect of this marvellous debut album that fails to impress. The opening track Birds opens with a gorgeous piano intro lasting close to a minute and a half before Anne’s vocals kick in and, if an opener was ever an advert for what is to come, then this is it. Haunting and brilliantly evocative vocals layered around Dolf’s memorable keys create a canvas rich in atmosphere and melancholy.

On first meeting, Anne joined Dolf’s band as a background singer but he very quickly realised that her vocals and lyrics needed to be up front and centre stage. It was a very wise decision. Anne van den Hoogen may be a new name in the UK but the purity and clarity of her vocals absolutely demand attention. Bringing to mind Hannah Reid of London Grammar with occasional nods to Enya it is difficult to imagine this talent staying under the radar for long.

Although rooted in the folk and singer-songwriter tradition, these songs transcend easy categorisation. The album has no great shifts in pace or tempo, instead it weaves subtle change of chords with experimental, echoing guitars and tranquil vocals around the layered framework of Dolf’s piano and subtle electronics.

Nature is a major theme in the album’s sound and lyrics. During her study of literary history, Anne fell in love with Romanticism – an 18th century artistic, literary, and intellectual movement, in which nature was used as a metaphor for emotions. Is that important to appreciate this album? Absolutely not, but, with tracks entitled Birds, Fireflies and Wintering perhaps it explains away, even a little, just what lies behind the creation of this most joyous of albums.

A word too for the duo’s production of the album.  Keeping a balance that lets those wonderful vocals shine without overshadowing the intricacies of Smolenaers accompaniment is no mean achievement and deserves to be celebrated as much as the music itself. A simply, wonderful tonic for these dark, cold January evenings and deserving of a very early claim for one of the albums of the year.

Sublime vocals on a wonderfully atmospheric slice of musical brilliance.