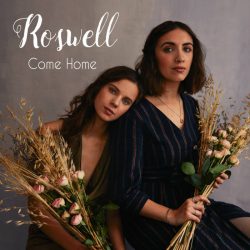 ‘Come Home’ is the second EP from Indie Folk/Americana duo Roswell. Following on from the 5 track ‘Remedy’ (which won Fatea EP of the year in 2019) these 6 tracks will further whet the appetite for a proper full-length album. Having been writing and performing together for just two years, Zoë Wren and Jasmine Watkiss show astonishing maturity in their writing and performing. They have enough in their locker to appeal both to niche listeners and to cross over and charm a wider fan base. Carry on in this vein and they will be big. Both play and sing sublimely –  First Aid Kit, another duo, may spring to mind. The Staves and Wildwood Kin may be actually be a better point of reference, both of which of course have an extra voice, but, such is the strength and depth of the harmonies, that Roswell easily compete in that company.

The EP kicks off with ‘Restless’ and straight away the harmonies envelope and embrace before being girded further by banjo and percussion. It’s strong, it’s catchy and it has a message. ‘Restless’ twins the craving of youth for life’s journey to start, for the excitement of change, with disillusionment that at the same time there is little in the hinterland of that journey that offering any kind of cohesive certainty  “The government’s destroying things for young and for the old//The poor are getting poorer and are left out in the cold//A full-time job is not enough for survival anymore//Millennials are desperate, still at home at 34”.

‘Comfortable Lies’ sees the duo sharing plaintive ill-fated heartbreak – “You and I, maybe in another life//Maybe if the stars aligned in a different way//We’re worlds apart and we have been from the start//Just to wish with all your heart is not enough to stay”. The title track deals with a woman on a “lonesome journey” and being called to ‘Come Home’ because “The grass seems greener on the other side//But the trees are bare and the river’s dry”; It’s dreamy, it’s contemplative and it’s all rather good,

Perhaps, just maybe, ‘Romeo, Juliet’ is not so strong, lacking the focus of the other tracks, but that is because being sandwiched between ‘Come Home’ and ‘End of the Line’ it has to live in exalted company.

Roswell are on an upward trajectory, no doubt about it; get in their now so you can say ‘Ah yes, I was listening to them before they were famous’.