The early ’70s were an exciting time for anyone with the slightest interest in the emerging country-rock genre. Dylan’s recent records together with those of The Band had really sparked an awareness, and other leading groups such as The Grateful Dead and The Rolling Stones were introducing country flavours to their signature sound. There was also the whole Byrds related phenomenon which covered the bluegrass of The Kentucky Colonels and The Dillards, the bluegrass country-rock of Dillard and Clark, the Byrds’ ‘Sweetheart of the Rodeo’ album and Gram Parsons and the Flying Burrito Brothers.

The challenge with the Byrds related music was that very few people at the time actually got to hear it – rather it was inferred from articles in the musical press and the odd snatch on radio. ‘Sweetheart of the Rodeo‘ failed to chart in the UK and the first time most people heard the Flying Burrito Brothers was on their 1974 compilation album ‘Close Up The Honky Tonks’, issued following Gram Parsons’ death in 1973. The Country Gazette were an early ’70s band with a record deal with major label United Artists that released their albums in Europe and included musicians who had been members of the Kentucky Colonels, The Dillards, Dillard and Clark, and the Flying Burrito Brothers. United Artists marketed the albums as rock albums at the time which gave us Europeans an opportunity to listen to the music at the time of release; they even appeared on The Old Grey Whistle Test.

Fiddler, Byron Berline, was a reasonably hot property at the beginning of the ’70s following his work with The Dillards, Dillard and Clark and session work which included The Byrds and ‘Let It Bleed‘ by the Rolling Stones and he was offered a record deal by United Artists. He started pulling together a group of musicians in 1971 which would eventually become Country Gazette. These included Roger Bush, bass, and Billy Ray Latham, banjo, both from the Kentucky Colonels, and Herb Pedersen, guitar from the Dillards.

Before the group could record, Berline and Bush were asked to tour with The Flying Burrito Brothers by Chris Hillman following the recent departure of original member “Sneaky” Pete 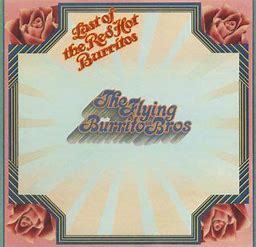 Kleinow and Bernie Leadon. That tour produced the live ‘Last Of The Red Hot Burritos’ album which was the final Flying Burrito Brothers album on A&M. Interestingly, while Gram Parsons had long since left and Chris Hillman was the only remaining original member, ‘Last Of The Red Hot Burritos’ is a very fine album with well-played versions of classic Burrito tunes, some covers and a three-song acoustic section reflecting Hillman’s love of bluegrass. Berline and Bush also played a contractual commitment tour in Europe with the remnants of the Burritos, plus Alan Munde on banjo and guitar after Hillman also left the group. This contractual obligation European tour laid the ground for Country Gazette’s initial success on this side of the pond and sowed the seeds for the ongoing popularity of bluegrass in Europe, particularly in the Netherlands.

Alan Munde, banjo,  and Kenny Wertz, guitar, joined Country Gazette from the Burrito experience following Herb Pedersen and Billy Ray Latham’s departure. The group went into the studio with producer Jim Dickson, manager of the early Byrds and producer of The Dillards among others, to record their first album ‘Traitor In Our Midst’ released in 1972. The album was a mixture of self-penned tunes, including one by Herb Pedersen who also guested on a few tracks, and covers of Gene Clark, The Louvin Brothers and traditional songs. While the album was marketed to the rock audience of the time as long hair music it was in fact progressive bluegrass in its finest form. Standout tracks included Gene Clark’s ‘Keep On Pushing’, Byron Berline and Roger Bush’s ‘Hot Burrito Breakdown’ and Josh Graves’ ‘If You’re Ever Gonna Love Me’. 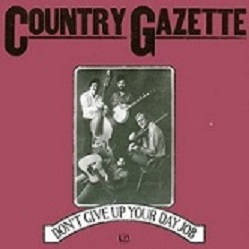 ‘Don’t Give Up Your Day Job’ in 1973. Again, this was produced by Jim Dickson and it also featured Herb Pedersen, Al Perkins on pedal steel, Leland Sklar electric bass and Clarence White on guitar and dobro in some of his last sessions. In some ways this is an even better album than their debut and it includes tunes by Stephen Stills, Graham Nash, Flatt and Scruggs, Don McLean and even ‘Honky Cat’ by Elton John and Bernie Taupin which are now seen as highlights of early progressive bluegrass.

While the first two Country Gazette albums garnered critical acclaim from the music press of the time, they were not a commercial success and United Artists let the band go. The band continued to record for various independent labels as a progressive bluegrass act with a revolving group of musicians. Clarence White’s brother, Roland White, joined the band after the recording of ‘Don’t Give Up Your Day Job’ on mandolin and guitar f0llowing Clarence’s death in 1973 and remained until the mid ’80s. Roland White’s mandolin and Alan Munde’s banjo work was very influential on the emerging second wave of bluegrass musicians in the ’70s. Alan Munde continued into the ’90s with a version of the band.

Country Gazette as a band have two major claims to fame. First, they were integral to the development of country-rock. Second, there is an argument that they have had an even bigger influence on the development of bluegrass music from the ’70s to the present day. For anyone interested in country-rock or bluegrass then their first two albums are a must listen and they are currently available on BGO Records as a 2 on 1 Album on CD. If you are then bitten by the Country Gazette bug, BGO Records have also issued a 3 on 2 Album on CD which includes ‘Live’, ‘Sunny Side Of The Mountain’ and ‘What A Way To Make A Living’ and Flying Fish Records have issued a compilation of their late ’70s and ’80s work ‘Hello Operator – This Is Country Gazette’. Finally, both the BGO releases have excellent liner notes by the great John Tobler.