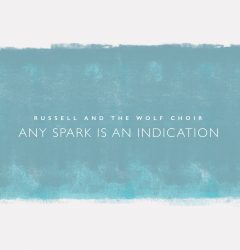 A mini-LP with something of a Californian West Coast vibe, yet delivered from the wilds of Essex. On vinyl too! Russell and The Wolf Choir actually nail a power pop/indie sound pretty well in the first part of this record. Big fuzzy choruses abound, with hints of Pixies guitars, Teenage Fanclub harmonies, Tom Petty arrangements (God rest his soul) and suitably non-bombastic vocals.

Perhaps even a little Kings of Leon in there too (but let’s try to overlook that one). The Constant kicks things off, building from a solo voice and strum to a full fat, full force chorus; dropping down and storming back up in just the right measure. Every Decision Counts is probably better, very Petty-esque in its introduction. Pedal steel creeps into The Evening Wore On Pt. 2, also on Precipitous Banks. The final two tracks, the aforementioned Precipitous Banks and Untitled #2 are quiet, acoustic songs. There’s absolutely nothing wrong with them, but they’re more inoffensive than they are attention-grabbing. As such the end of the record isn’t nearly as much fun as the opening few tracks are. Nonetheless,  and despite not breaking any tangible new ground, Russell and the Wolf Choir distil a fine blend of guitar pop influences to make a largely enjoyable indie meets Americana sound.