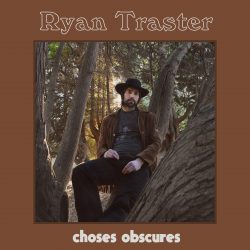 Minneapolis based Ryan Traster plies his trade with a super laid back, woozy, indie, country-pop sound. On ‘Choses Obscures’ (French for ‘unusual things’) you can hear the ghost of Tom Petty nodding sagely as the tunes roll past. Vocally there’s a lazy J. Mascis/Evan Dando feel that rolls from Traster; sometimes with lugubriousity, sometimes a weary optimism.

The record’s PR blurb has a ready-made fine comparison for us – this could so easily be a lost 1970s folky rock record that you might find lurking anonymously in a rummage sale. It’s a short record though, just the eight tracks. A 1970s folk-rock record would stretch eight tracks into a triple vinyl, but Traster keeps to a much punchier two to three-minute song ethic. Opener ‘Old World Present Tense’ sets the rancho relaxo tone nicely. Traster seeks a place to be left alone, to chill out and not have to worry about waiting around to die. An entirely understandable sentiment. ‘Lost in a Sound’ has a dreamy, almost-Paisley Underground, 1980s take on a 1960s sound. The reverb is mixed up high, where Traster’s voice and guitars can float upon it. ‘Endless Summer Blues’ has a touch of Young/Crazy Horse in its slow, loping groove. It’s probably the darkest track on the album. ‘Kansas’ leans a little towards Lemonheadsy guitar power-pop, in a short sweet blast. It’s quite likely that Traster’s music will end up largely undiscovered, the same destiny as the rummage sale finds it compares favourably to. This would be a shame.