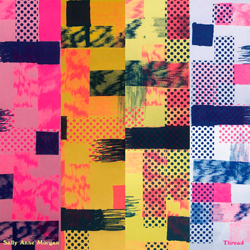 There aren’t many albums sent to AUK which mention The Third Ear Band in the promotional notes. Sally Anne Morgan is an Appalachian fiddle player (with Black Twig Pickers and the duo House and Land) and on her first solo album she not only delves into traditional Appalachian music but she expertly inserts influences gleaned from the golden age of English folk rock and exponents such as Shirley Collins and Nic Jones. The result is this intriguing album which places Morgan in the footsteps of The Holy Modal Rounders, Karen Dalton, Hillfolk Noir, Anna & Elizabeth and other practitioners of old weird Americana. Comprised of traditional covers and self penned songs, the join is invisible.

The opening ‘Polly on The Shore’ sets the scene perfectly for what is to come. A rickety banjo supports Morgan’s slightly off kilter voice allowing the song a beautiful naivety and a powerful sense of authenticity. ‘Garden Song’ opens with a gorgeous acoustic guitar and fiddle preamble before Morgan warbles wonderfully bringing to mind, and the mind boggles here, an odd mixture of Ivor Cutler and Nico as the song meanders on. ‘Sheep Shaped’ is an instrumental with Morgan’s fiddle finely sawed over gently rolling percussion while the later ‘Sugar In The Gourd’, a fiddle solo based on Clyde Davenport’s arrangement, just about defines the art of Appalachian fiddling.

Morgan, aside from fiddle, plays electric and acoustic guitar, banjo and piano on some of the selections and is supported here and there by Andrew Zinn and Nathan Bowles on guitar and percussion. Theirs is a light touch as the album seems unadorned, hewn from the hills and at one with nature as heard on the ethereal and enchanting ‘Wintersong’. Morgan accompanies herself on a lightly strummed electric guitar on the desolate ‘Wagoner’s Lad’ before closing with a full-blown venture into balladry on ‘Annachie Gordon’. A well-known story of blighted love with a tragic ending, Morgan sails through this song majestically with an arrangement as delicate and enticing as a frost hoared cobweb. A delightful album.