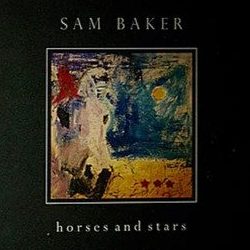 Coming 15 years after his debut album, ‘Mercy’, Sam Baker has released his first live album and ‘Horses and Stars’ is a corker of a record that captures everything that is great about his live performances. Recorded at the Imagine Event Center in Buffalo, NY in July 2018, Baker, in his own inimitable semi-spoken style, weaves his way through a selection of songs that paint evocative pictures of abandonment, alcohol, drug addiction, car wrecks and (especially topical in these days) illegal migrant border crossings from Mexico into the US.

The cynical among you may well be thinking that these topics have been covered ad nauseum by many singers and while that may be true, few are able to paint word pictures in the way that Sam Baker does.  Take ‘Broken Fingers’ (originally released on the 2007 album ‘Pretty World’) as an example. With the seemingly simple lyrics “These broken fingers, some things don’t heal, I can’t wake up from a dream when the dream is real…” Baker tells the story of the mental scars left over from 1974, when as a 20 year old he was nearly killed when a bomb, left by the communist revolutionary group The Shining Path, exploded next to him on a train as he travelled through Peru to Machu Picchu.

His injuries were devastating. A cranial bleed affected his speech, he required multiple surgeries to save his leg, his right eardrum needed to be replaced and his left hand was left a virtually useless crooked mess.  After some time he taught himself to play left handed but as a healthy young man transformed in one shocking instant into a shadow of his former self, it was no real surprise that he slipped into a world of pills, booze and anger. Eventually though the rage gave way to acceptance and finally forgiveness and slowly music and songs started to emerge.

‘Horses and Stars’ is a sparse album even by Sam Baker standards with just his guitar, the occasional harmonica lick and a piece of wood on the floor that he could tap his boot on. It’s this pared-down production that helps bring both an immediacy and intimacy to the record allowing the listener to be completely drawn into the stories and to relate fully to the subjects being sung about.

Those familiar with Sam Baker’s work will recognise many of the songs from his back catalogue and for those just discovering him for the first time, ‘Horses and Stars’ will act as a great introduction to this talented storyteller.