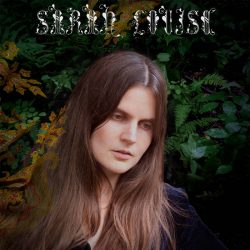 This is a record that is wrapped in layers. There’s Sarah Louise’s guitar playing, her voice, and vibes and strings, all melded together to give a kind of pointillist vision of the nature that surrounds her home in North Carolina. It’s an immersive experience and definitely one for headphones rather than blasting in the car on the commute – and yet it depicts all those little details: the roadside plants, the native birds, the dappling of light and shade as it flickers almost unnoticed across the windscreen. It is firmly rooted in the natural world (as I listened I couldn’t tell if the wood-pigeon’s coos were leaking in from outside the window or were part of the song).

Sarah Louise weaves together traditional folk with flakes of psychedelia and more leftfield tendencies. ‘Up On The Ridge’  wanders away from the old folk forms, eschewing the easy path and strays towards the experimental. Here cymbal washes and drum clatter gives way to a bucolic Dionysus infused swirl of instrumentation. She incorporates drones and then strings will take off like a covey of startled quail. Just as quickly the song will settle into just fingerpicked guitar. It’s a beguiling record; listening to it is akin to finding a clearing in the middle of a beautiful forest and spinning around until you lose your sense of place and fall into the earth in dizzy pleasure.